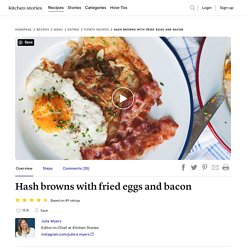 Peel and shred potatoes.Step 2/5kitchen towellarge mixing bowlTransfer shredded potatoes to bowl with cold water, stirring until water turns cloudy. Drain and rinse potatoes well under cold water. Transfer potatoes to kitchen towel and twist over sink to wring out as much liquid as possible. Transfer potatoes back to bowl and toss to loosen, then transfer back onto towel and wring out liquid again.Step 3/5saltpepperTransfer potatoes back to bowl and toss with salt and a couple grinds of black pepper.Step 4/560 ml vegetable oilmetal spatulapaper towelslarge nonstick skilletHeat vegetable oil in skillet over medium-high heat. 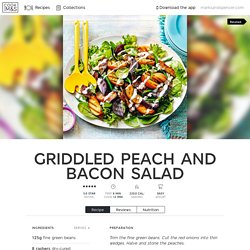 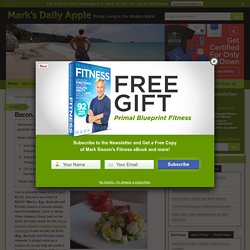 If you want to lose weight, gain muscle, increase energy levels or just generally look and feel healthier you've come to the right place. Here's where to start: Visit the Start Here and Primal Blueprint 101 pages to learn more about the Primal lifestyle. Subscribe to my weekly newsletter to receive an eBook called Primal Blueprint Fitness and more - all for free. Cut to the chase by visiting PrimalBlueprint.com. Thanks for visiting! You’ve probably heard of BLTs and BLTAs, but have you heard of BEATs? The bacon adds even more protein and flavor to the salad and seasons it with a salty, smoky flavor. In the past we’ve talked plenty about the health benefits of eggs and how to figure out which types of eggs to purchase, but what about cooking the perfect hard boiled egg? The fresher your eggs, the more likely it is that the shell will be difficult to peel off.

Personally, our approach is to use fresh eggs, gently cook them for no more than ten minutes and then cool them quickly. Brie & Bacon Brown Bread Melt. The humble bacon sandwich has been reborn! 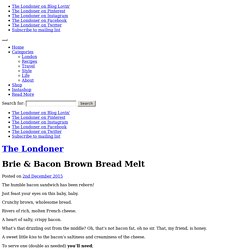 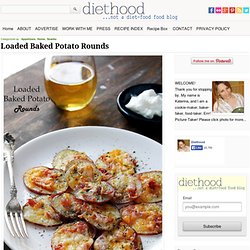 I know they aren’t chips-chips because the potatoes are not crunchy, but they look like chips. And if I ever had to tell you what my favorite potato chip flavor was, I would say Loaded Baked Potato Chips. Ever think about that; what would be your favorite chip flavor? But, like, one that is not out there, yet. I would pick Roasted Red Pepper (Ajvar) and Loaded Baked Potato. So, Loaded Baked Potato Rounds it is. I love these little nibbles.

This is a delicious snack that comes together in all of 30 minutes. Loaded Baked Potato Rounds Ingredients 4 medium sized red potatoes or new potatoes, washed, sliced into thin rounds, about 1/4-inch thick (I use a mandolin to cut even rounds) olive oil sea salt freshly ground peppercorns 5 or 6 strips of bacon, cooked until crisp, crumbled shredded monterey jack cheese shredded cheddar cheese sour cream (optional) Instructions Preheat oven to 375. ** Roasted Potatoes with Red Peppers, Garlic, and Bacon. Roasting potatoes and veggies is one of my favorite ways to cook them, aside from grilling. 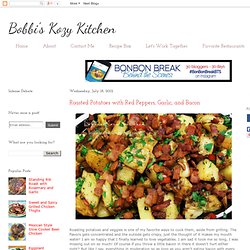 The flavors gets concentrated and the outside gets crispy, just the thought of it makes my mouth water! I am so happy that I finally learned to love vegetables. I am sad it took me so long, I was missing out on so much! Of course if you throw a little bacon in there it doesn't hurt either right? But like I say, everything in moderation so as long as you aren't eating bacon with every meal (which I sooo could) you are doing fine. This night was one of those refrigerator clean out meals.

One thing I know I can never go wrong serving here is potatoes. Dad - Are you making potatoes Me - Yes Dad. A Sweet and Savory BBQ Menu for Summer. Now that it’s unofficially summer, barbecues are making outdoor dining perfect for sharing time with family and friends. 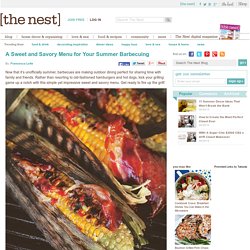 Rather than resorting to old-fashioned hamburgers and hot dogs, kick your grilling game up a notch with this simple yet impressive sweet and savory menu. Get ready to fire up the grill! Barbecued Corn with Bacon and Chili Butter What You’ll Need: 4 corn cobs, in their husks8 rashers smoked streaky baconfreshly ground black pepper. Cheese And Bacon Potato Skins Recipe. Bacon Guacamole Grilled Cheese Sandwich. A guacamole grilled cheese sandwich has been on my to try list for a while now and since I was making the bacon guacamole on the weekend I figured I would just pick up double the ingredients and make both. 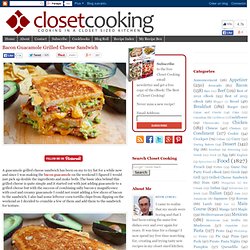