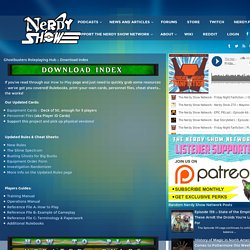 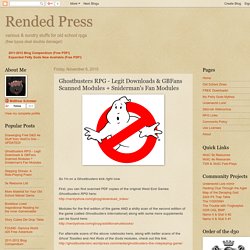 First, you can find scanned PDF copies of the original West End Games Ghostbusters RPG here: Modules for the first edition of the game AND a shitty scan of the second edition of the game (called Ghostbusters International) along with some more supplements can be found here: For alternate scans of the above rulebooks here, along with better scans of the Ghost Toasties and Hot Rods of the Gods modules, check out this link: Also, you can buy Ghost dice and some more GBRPG goodies here: Second, there are some online-only galleries of additional scenarios here: Ghosbusters RPG Ghostbusters International The interface for viewing these online galleries is kinda clunky. Ghostbusters Fans Module Scans Every page is watermarked with the Ghostbusters Fans logo, but they are still readable and useable. Finally, Tim Snider (aka Sniderman) has made three of his fan modules available.

How Dry I Am & Shadows over YonkersRagnarok-A-Bye Baby UPDATE! ANOTHER UPDATE! Savage Ghostbusters. "GHOSTBUSTERS®" and the "GHOST DESIGN®" are registered trademarks of Columbia Pictures Industries, Inc. 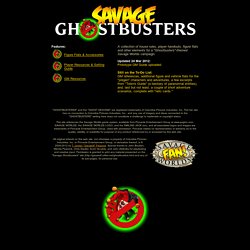 This fan site has no connection to Columbia Pictures Industries, Inc., and any use of imagery and ideas connected to the "GHOSTBUSTERS" setting here does not constitute a challenge to trademark or copyright status. This site references the Savage Worlds game system, available from Pinnacle Entertainment Group at www.peginc.com. SAVAGE WORLDS, the SAVAGE WORLDS LOGO, and the SMILING JACK icon, and all associated logos and images are trademarks of Pinnacle Entertainment Group. 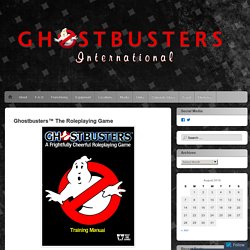 It was so important to you, you moved becoming a Ghostbuster before being a sports star, fire fighter/police officer or astronaut. Problem was until you were in high school, maybe even college, you didn’t really know how to make Ghostbusting a career. I wish we had a free web site then! With any career, especially one that involves opening a business, it takes time, training, virtues, and huge some’s of money. Its understandable as most people grow older, they need to make decisions that best fit their lives. In 1986 Ghostbusters™ A Frightfully Cheerful Roleplaying Game was published by West End Games, Inc. If you didn’t have Ghostbusters™ A Frightfully Cheerful Roleplaying Game or its second printing by the very early 90s, you were probably out of luck. Manuals.