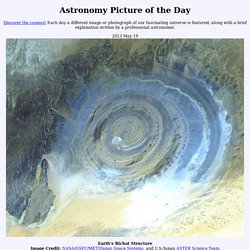 Each day a different image or photograph of our fascinating universe is featured, along with a brief explanation written by a professional astronomer. 2013 May 19 Explanation: What on Earth is that? The Richat Structure in the Sahara Desert of Mauritania is easily visible from space because it is nearly 50 kilometers across. Once thought to be an impact crater, the Richat Structure's flat middle and lack of shock-altered rock indicates otherwise. Visit to the Ries impact crater in Germany. You may have seen the recent news about the near-Earth flyby of a 2.7 km asteroid. 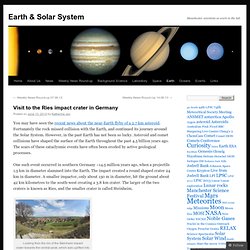 Fortunately the rock missed collision with the Earth, and continued its journey around the Solar System. However, in the past Earth has not been so lucky. Asteroid and comet collisions have shaped the surface of the Earth throughout the past 4.5 billion years ago. The scars of these cataclysmic events have often been eroded by active geological processes. One such event occurred in southern Germany ~14.5 million years ago, when a projectile 1.5 km in diameter slammed into the Earth. Looking from the rim of the Steinheim impact crater towards the central peak, which was uplifted into a hill during the impact cratering event (Image K.Joy) SEAES students inspect an overturned megablock of limestone on the Ries crater rim (Image K. Journal of Structural Geology - Shear zone geometry: A review. Section II: Kinematics and mechanics J.G. 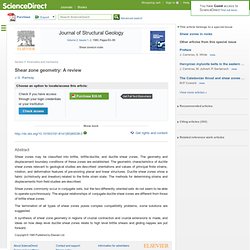 Ramsay Geologisches Institut, ETH, CH-8092 Zürich, Switzerland Received 26 June 1979, Accepted 26 September 1979, Available online 27 March 2003 Choose an option to locate/access this article: Check if you have access through your login credentials or your institution Check access Show more. Journal of Structural Geology. Digital Geology: Earthquakes. Structural Geology by the Deformation numbers. Structural geologists seek to understand how rocks have changed shape, in order to better understand wider processes such as how mountains are formed. 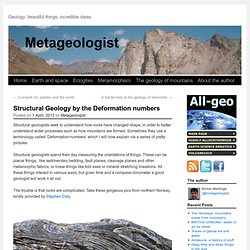 Sometimes they use a terminology called ‘Deformation-numbers’ which I will now explain via a series of pretty pictures. Structural geologists spend their day measuring the orientations of things. These can be planar things, like sedimentary bedding, fault planes, cleavage planes and other metamorphic fabrics; or linear things like fold axes or mineral stretching lineations. All these things interact in various ways, but given time and a compass-clinometer a good geologist will work it all out. The trouble is that rocks are complicated. It’s clear that there is tight folding in metamorphosed sediments. But, as so often in field geology, a closer look from the same area reveals a more complicated picture. Tufts Geology Courses. Structural Geology. Structural Geology Techniques. Earth Science Current Events. Structural Geology.

When did Plate Tectonics begin on Earth, and what came before? By Robert J. 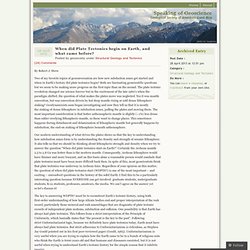 Stern Two of my favorite topics of geoconversation are how new subduction zones get started and when in Earth’s history did plate tectonics begin? Both are fascinating geoscientific questions but we seem to be making more progress on the first topic than on the second. The plate tectonic revolution changed our science forever but in the excitement of the late 1960’s when the paradigm shifted, the question of what makes the plates move was neglected. Yes it was mantle convection, but was convection driven by hot deep mantle rising or cold dense lithosphere sinking? Our modern understanding of what drives the plates shows us that the key to understanding how subduction zones form is by understanding the density and strength of oceanic lithosphere.

The key to answering WDPTS? Earth is the only known silicate planet that has plate tectonics, so plate tectonics is probably a special way that viscous, rocky planets cool. Earthquake clustering, complex fault ruptures, and the geologic record. By M. 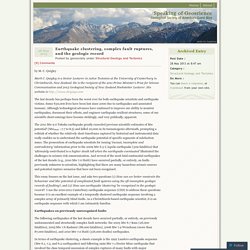 C. Quigley Mark C. Quigley is a Senior Lecturer in Active Tectonics at the University of Canterbury in Christchurch, New Zealand. He is the recipient of the 2011 Prime Minister’s Prize for Science Communication and 2013 Geological Society of New Zealand Hochstetter Lecturer. The last decade has perhaps been the worst ever for both earthquake scientists and earthquake victims. The 2011 Mw 9.0 Tohuku earthquake greatly exceeded previous scientific estimates of Mw potential1 (Mwmax ~7.7 to 8.5) and killed 20,000 in its tsunamogenic aftermath, prompting a rethink of whether the relatively short timeframe captured by historical and instrumental data really enables us to understand the earthquake potential of specific segments of subduction zones.