Information credibility on twitter. A Survey on Information Credibility on Twitter. Facebook instant-messaging window used to spread virus. Fake link directs users to download infected softwareOverrides protective softwareDeletes anti-virus software instantly By Rob Waugh Published: 12:20 GMT, 21 May 2012 | Updated: 15:08 GMT, 21 May 2012 Facebook's Mark Zuckerberg: The pop-up window, used for person-to-person chat, pops up with a message from a 'friend' which links to an innnocent looking website A new computer virus is spreading via the chat window on Facebook. 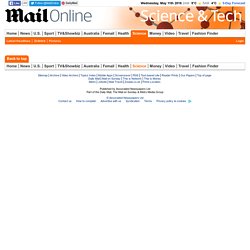 The pop-up window, used for person-to-person chat, pops up with a message from a 'friend' which links to an innnocent looking website. Clicking the link instantly infects your PC with the virus, labelled Steckt.Evl by discoverers Trend Micro. The virus instantly disables and removes anti-virus software, then spreads itself by opening chat windows on the Facebook friends of the user. 'The worm propagates via instant messaging applications and social networking sites,' says security experts Trend Micro which uncovered the new threat. Fear, Misinformation, and Social Media Complicate Ebola Fight. Based on Facebook and Twitter chatter, it can seem like Ebola is everywhere. 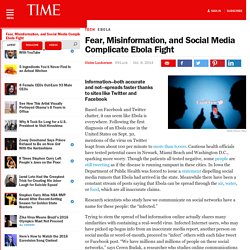 Following the first diagnosis of an Ebola case in the United States on Sept. 30, mentions of the virus on Twitter leapt from about 100 per minute to more than 6,000. Cautious health officials have tested potential cases in Newark, Miami Beach and Washington D.C., sparking more worry. Though the patients all tested negative, some people are still tweeting as if the disease is running rampant in these cities.

In Iowa the Department of Public Health was forced to issue a statement dispelling social media rumors that Ebola had arrived in the state. Meanwhile there have been a constant stream of posts saying that Ebola can be spread through the air, water, or food, which are all inaccurate claims. Research scientists who study how we communicate on social networks have a name for these people: the “infected.” Part of the problem is the piecemeal way in which people now gather their news. Social networking sites fuelling stalking, report warns.

New forms of digital technology and social networking sites such as Facebook are increasingly putting people at risk of stalking, according to a report published on Wednesday. 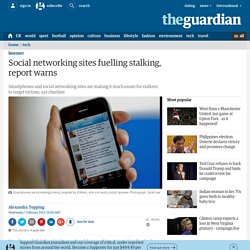 The study, from Women's Aid and the Network for Surviving Stalking, warns that mobile phones, particularly smartphones, are increasingly being targeted. Spyware could be installed on the phone in "less than five minutes", allowing a stalker to listen remotely to the phone's surroundings, intercept calls, track text messages and the location of a device if it has GPS hardware. Computer spyware could be installed remotely, via an email attachment, and then remain hidden on the computer, warned the report.

Tweets of false shootouts cause panic in Mexico City. MEXICO CITY – Mothers rushed to pull their kids out of school, shopkeepers slammed down their metal gates, and bus drivers radioed one another about streets to avoid after false rumors of shootouts and gunmen traveling in a caravan in a Mexico City suburb began circulating on social networks. 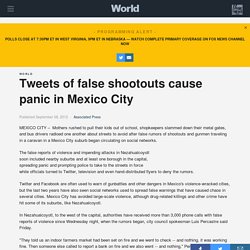 The false reports of violence and impending attacks in Nezahualcoyotl soon included nearby suburbs and at least one borough in the capital, spreading panic and prompting police to take to the streets in force while officials turned to Twitter, television and even hand-distributed flyers to deny the rumors. INFOGRAPHIC: Social Media: The New News Source. Evaluating Social Media - Evaluating Information - Guides at Johns Hopkins University. According to Twitter, the site has more than 140 million active users, with over 340 million Tweets per day. 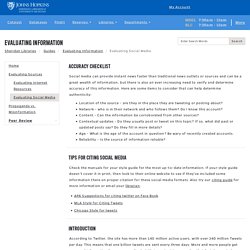 This means that one billion tweets are sent every three days. More and more people get news and information from news media, but it's important to remember that fast does not always mean accurate. How to identify credible information on social media can be challenging. Rumors and misinformation can spread quickly through social media outlets such as Twitter or Facebook. Some of the criteria used to evaluate Internet sources, such as being skeptical, asking questions, looking at the quality of the source of the information, still apply in social media. Storyful recently added four case studies that show how they verified online videos and other content for clients. Social Media Rumors and Hoaxes. Social media rumors have been around as long as the Internet and hoaxes have spread from email to chat rooms and networking sites. 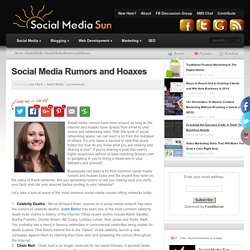 With this quirk of social networking space, we can learn a lot from the mistakes of others. It’s only takes a second to click that share button but how do you know what you are reading and sharing is true? Social media mistakes: Lessons from American Apparel - tribunedigital-chicagotribune. July 09, 2014|Scott Kleinberg | So Social American Apparel posted this image -- which has since been removed -- to its Tumblr account. 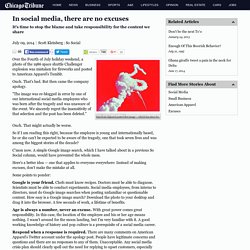 (Image from Tumblr) Over the Fourth of July holiday weekend, a photo of the 1986 space shuttle Challenger explosion was mistaken for fireworks and posted to American Apparel's Tumblr. Ouch. That's bad. "The image was re-blogged in error by one of our international social media employees who was born after the tragedy and was unaware of the event. Social media rumors fuel weapon scare at Jefferson Co. school.