Why We Feel FOMO (Fear of Missing Out) and What to Do About It. The term FOMO (fear of missing out) might have been coined in the age of social media, but it’s not a new concept. 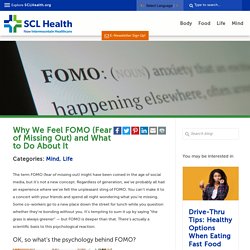 Regardless of generation, we’ve probably all had an experience where we’ve felt the unpleasant sting of FOMO. You can’t make it to a concert with your friends and spend all night wondering what you’re missing. Some co-workers go to a new place down the street for lunch while you question whether they’re bonding without you. It’s tempting to sum it up by saying “the grass is always greener” — but FOMO is deeper than that. There’s actually a scientific basis to this psychological reaction. OK, so what’s the psychology behind FOMO?

Research suggests that people are twice as affected by losses as they are by gains. All right, so that’s part of it — we’re wired to avoid losing out on things, including experiences. Psychologist Barry Schwartz would also add that we simply have too many choices . Depression, Social Media and Young Adults. If you have children who are growing up with a cell phone in their hands, you’ve seen the behavior. 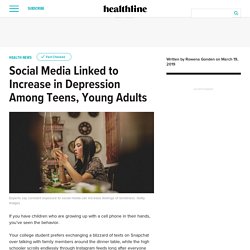 Your college student prefers exchanging a blizzard of texts on Snapchat over talking with family members around the dinner table, while the high schooler scrolls endlessly through Instagram feeds long after everyone else is asleep. The love affair young people have with their smartphones is a hallmark of the iGen — as those born in the mid-1990s or later are known — and it’s a concern for those who believe the devices might be partly responsible for the growing incidence of major depression and suicide among that age group.

San Diego State University psychology professor Jean Twenge, PhD, who wrote a book about the iGen label she coined and specializes in the study of generational differences, says the possible nexus between digital media and depression boils down to “just the pure amount of time that teens spend online.” What they found supported their conjecture. Smartphone addiction could be changing your brain - CNN. "Nomophobia? 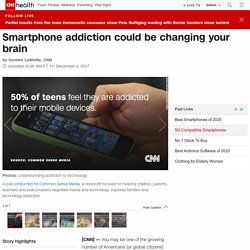 " you mutter as you read this on your ever-present smartphone. "Of course not. " "NO MObile PHOne phoBIA" is a 21st-century term for the fear of not being able to use your cell phone or other smart device. Cell phone addiction is on the rise, surveys show, and a new study released Thursday adds to a growing body of evidence that smartphone and internet addiction is harming our minds -- literally. Rate your responses on a scale of 1 (completely disagree) to 7 (strongly agree) and add your score. "It might be a good idea to be conscious of that," Yildirim said, "but we are only concerned if it starts to interfere with your daily life.

" Did you score between 100 and 200? "This might negatively affect your social life and relationships with friends and family," Yildirim said. "It might affect your ability to work or study, because you want to be connected to your smartphone all the time," he added. What's wrong with being a cell phone junkie? It's not just driving. 7 Scary Things You Never New About Cell Phone Addiction. FOMO: What’s the psychology behind the fear of missing out? This question originally appeared on Quora, the best answer to any question. 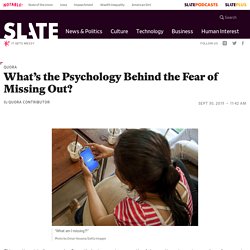 Ask a question, get a great answer. Learn from experts and access insider knowledge. You can follow Quora on Twitter, Facebook, and Google Plus. Answer by Anita Sanz, clinical psychologist: The fear of missing out is an old—actually an ancient—fear, being triggered by the newest form of communication: social media. Our survival as an individual within a tribe, and thus our survival as a species, once hinged on our being aware of threats both to ourselves and to the larger group. We all know that systems to consolidate and enhance communication among humans to keep each other informed of important information, including potential sources of danger to our tribes/countries/species, developed over time and include the forms we interact with today such as television, newspapers, the Internet, and social media platforms.

What is the psychology behind FOMO? Why we experience fear of missing out - Business Insider.