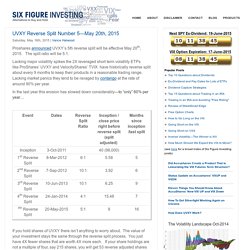 The split ratio will be 5:1. Lacking major volatility spikes the 2X leveraged short term volatility ETPs like ProShares’ UVXY and VelocityShares’ TVIX have historically reverse split about every 9 months to keep their products in a reasonable trading range. Lacking market panics they tend to be ravaged by contango at the rate of around 90% per year. In the last year this erosion has slowed down considerably—to “only” 60% per year… If you hold shares of UVXY there isn’t anything to worry about. If you are short UVXY, same story, no material impact. If you were holding UVXY options (long or short) when the reverse split occurred there’s still no material impact, however the option chains are going to hurt your head for a while. For regular, forward splits things are more straightforward —the strike price of the options are divided by the split ratio, and the number of contracts is multiplied by the split ratio. Russia’s economy: The rouble’s rout.

EVERY central banker knows the importance of trust. 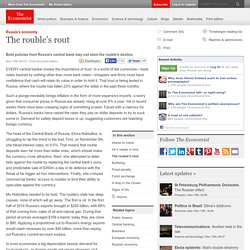 In a world of fiat currencies—bank notes backed by nothing other than more bank notes—shoppers and firms must have confidence that cash will retain its value in order to hold it. That trust is being tested in Russia, where the rouble has fallen 23% against the dollar in the past three months. Such a plunge inevitably brings inflation in the form of more expensive imports, a worry given that consumer prices in Russia are already rising at over 8% a year. Yet in recent weeks there have been creeping signs of something scarier. Faced with a clamour for dollars, Russia’s banks have raised the rates they pay on dollar deposits to try to suck some in. 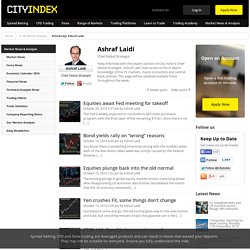 Gain access to his in depth knowledge of the FX markets, macro economics and central bank policies. This page will be updated multiple times throughout the week. The Fed is widely expected to conclude its QE3 asset purchases program, with the final taper of the remaining $15 bn. Since there is no […] You know there is something inherently wrong with the markets when each of the few recent rallies week was strictly caused by the Federal Reserve; […] The ensuing plunge in global equity markets enters a worrying phase after disappointing US economic data further destabilised the notion that the US economy remained […] Correlations come and go, the old normal gives way to the new normal and back, but one thing remains intact; the Japanese yen is the […] Is this the sell-off “everyone” has been waiting for?