Aurasma: A Great Self-Promotion Tool and a Way to Get Your Film into Augmented Reality. Augmented Reality has been slowly making its way into our lives, mostly in the form of demo videos, games, and Google’s forthcoming Glass project. 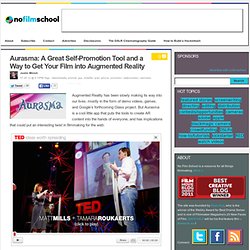 But Aurasma is a cool little app that puts the tools to create AR content into the hands of everyone, and has implications that could put an interesting twist in filmmaking for the web: As a promotional tool, this would be great for indie filmmakers. Giving your business card to someone would mean that they would be able to check out your demo reel and click-through to your website just by holding their phone up to your card. Or you could make a location-based aura for a movie poster or a stack of promo post cards. The location of your image shows up in Aurasma so people can easily seek it out –and once they find it– they can see your film’s trailer and website. But to me, this isn’t the most interesting aspect of Aurasma. Link: Aurasma (Note: there is a video on the homepage that autoplays and loops) Related Posts.

Rolling Shutter 1.0v2 for Nuke 64-bit MAC. Sonnet - Thunderbolt Storage, Adapters & Expansion Boxes. DIY eGPU experiences. DIY eGPU on Tablet PC's: experiences, benchmarks, setup, ect... NBR is certainly has a lot on the subject of the eGPU, almost too much to handle reallyNamelessplayer: I tried Crysis, on the 2730p alone it was unplayable even at lowest settings (actually just navigating the menu when pausing the game was agonizing); but with the DIY ViDock displaying to the internal screen it handles all Medium settings pretty well (that was the 'recommended settings' by the game's auto detect. 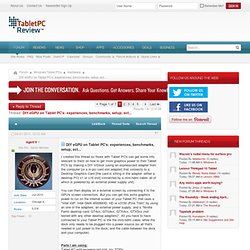 There were some drop outs, but nothing to major, though it wasn't 'smooth as butter'; I didn't check frame rates, because I don't know of a way to besides a program that will drop 10-30fps from just running it; I'll have to look into the Crysis benchmark program later on). External Thunderbolt graphics card for Macs will not blow you away. Last week, as the result of a straw poll on Facebook, Village Instruments agreed to begin development of an external Thunderbolt-connected graphics card enclosure. 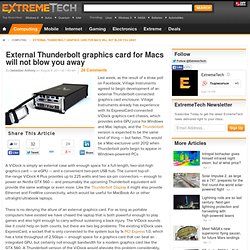 Village Instruments already has experience with its ExpressCard-connected ViDock graphics card chassis, which provides extra GPU juice for Windows and Mac laptops, and the Thunderbolt version is expected to be the same kind of thing — but faster. This would be a Mac-exclusive until 2012 when Thunderbolt ports begin to appear in Windows-powered PCs. A ViDock is simply an external case with enough space for a full-length, two-slot-high graphics card — or eGPU — and a convenient two-port USB hub. The current top-of-the-range ViDock 4 Plus provides up to 225 watts and two six-pin connectors — enough to power an Nvidia GTX 560 — and presumably the upcoming Thunderbolt equivalent will provide the same wattage or even more.

Making Future Magic: iPad light painting. Create A Non-Existing Man Via Light Painting [Not For The Faint Of Heart] We have shown screen doing 3D extrusion before using both iPads and iPhones, but this is the first time we are featuring a tutorial that uses a 30″ monitor. 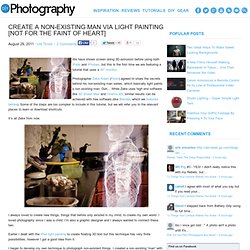 Photographer Zeke Adam (Flickr) agreed to share the secrets behind his non-existing man series, which basically light paints a non existing man. Duh… While Zeke uses high end software like 3D Studio Max and Cinema 4D, similar results can be achieved with free software (like Blender, which we featured before). Some of the steps are too complex to include in this tutorial, but we will refer you to the relevant places to learn or download shortcuts. It’s all Zeke from now. I always loved to create new things, things that before only existed in my mind, to create my own world. Stop-motion + CGI Animation Hybrid – iPad Light Painting « Permian – solo animator artist filmmaker. First off let me start by saying, ‘I Hate iPads’. 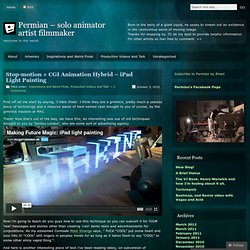 I think they are a gimmick, pretty much a useless piece of technology and a massive waste of hard earned cash brought to you of course, by the gimmick masters at MAC. There! Now that’s out of the way, we have this; an interesting new use of old techniques brought to you by ‘Dentsu London’, who are some sort of advertising agency. Now i’m going to teach all you guys how to use this technique so you can subvert it for YOUR ‘real’ messages and stories other than creating ‘cool’ demo reels and advertisements for corporations. As my esteemed Comrade Mdot Strange says, ” FUCK “COOL” put some heart and soul into it! And here is another interesting piece of text i’ve been reading lately, on subversion of corporate culture and tools from ‘Re-Imagining Animation’ by Paul Wells and Johnny Hardstaff. Essentially the technique utilises any portable screen, tablet pc(urgh) or laptop to light paint cross sections of a CG object. 1.