Aarti Sharma is a security consultant. It is her inner calling to share her experience on emergency services & women security with society. 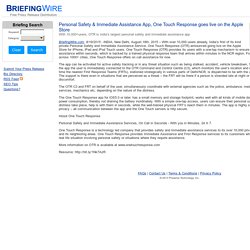 One Touch Response (OTR) provides its users with a one-tap mechanism to ensure their personal safety via on call assistance within seconds, which is backed by a trained physical response team that arrives within minutes in the NCR region. For its users beyond NCR and across 1000+ cities, One Touch Response offers on call assistance for now. The app can be activated for active safety tracking or in any threat situation such as being stalked, accident, vehicle breakdown, fire, medical etc.. At the touch of the app the user is immediately connected to the OTR Command and Control Centre (C3), which monitors the user’s location and establishes contact. About One Touch Response Resource: Personal Safety & Immediate Assistance App, One Touch Response goes live on the Apple Store. Technology: Transforming Crisis Management, for Good. The human race, since time immemorial, has grappled with disaster preparedness in a bid to secure a shield against the unpredictable distresses of life. 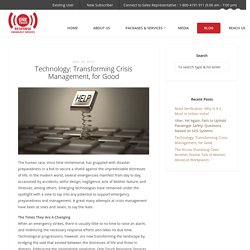 In the modern world, several emergencies manifest from day to day, occasioned by accidents, wilful design, negligence, acts of Mother Nature, and illnesses, among others. Emerging technologies have remained under the spotlight with a view to tap into any potential to support emergency preparedness and management. A great many attempts at crisis management have been at sixes and seven, to say the least. The Times They Are A Changing When an emergency strikes, there is usually little to no time to raise an alarm, and mobilizing the necessary response efforts also takes its due time.

Technological progressions, however, are now transforming the landscape by bridging the void that existed between the distresses of life and those in distress. iDawg – Designed to assist in various aspects of crisis management. Uber, Yet Again, Fails to Uphold Passenger Safety: Questions Raised on SOS Systems. What Happened and Responses, So Far Uber is again in the news and again for a bad cause. 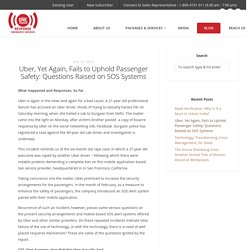 A 21-year old professional dancer has accused an Uber driver, Vinod, of trying to sexually harass her on Saturday morning, when she hailed a cab to Gurgaon from Delhi. The matter came into the light on Monday, after victim’s brother posted a copy of bizarre response by Uber on the social networking site, Facebook. Gurgaon police has registered a case against the 40-year old cab driver and investigation is underway. This incident reminds us of the six-month old rape case, in which a 27-year old executive was raped by another Uber driver – following which there were notable protests demanding a complete ban on this mobile application based taxi service provider, headquartered in in San Francisco, California.

Taking conscience into the matter, Uber promised to increase the security arrangements for the passengers. SOS Alert Systems: How Reliable they Actually Are? Himmat: Another Similar Dismal Tale. Maid Verification: Why Is It a Must In Urban India? In the recent past, Delhi and NCR have witnessed a notable surge in crimes ranging from robberies, burglaries, home invasions, and even personal atrocities such as murder and rape. 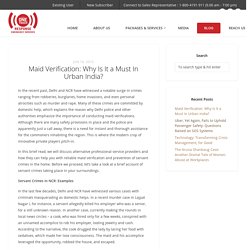 Many of these crimes are committed by domestic help, which explains the reason why Delhi police and other authorities emphasize the importance of conducting maid verifications. Although there are many safety provisions in place and the police are apparently just a call away, there is a need for instant and thorough assistance for the commoners inhabiting the region. This is where the modern crop of innovative private players pitch-in. In this brief read, we will discuss alternative professional service providers and how they can help you with reliable maid verification and prevention of servant crimes in the home. 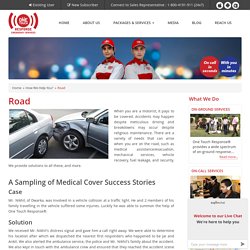 Accidents may happen despite meticulous driving and breakdowns may occur despite religious maintenance. Emergency Medical Services, Medical Situation Help & Care - OTR. A medical emergency may arise out of various scenarios. 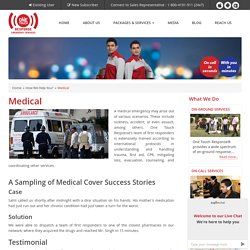 Emergency Assistance Services & Emergency Distress Help - OTR. One Touch Response Emergency Services was conceived by a group of individuals who looked around and noticed the deteriorating security and safety environment for the common citizen in Delhi and neighboring regions. 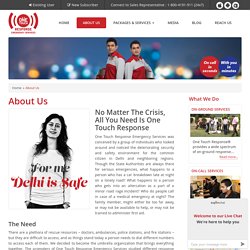 Though the State Authorities are always there for serious emergencies, what happens to a person who has a car breakdown late at night on a lonely road? What happens to a person who gets into an altercation as a part of a minor road rage incident? Who do people call in case of a medical emergency at night? The family member, might either be too far away, or may not be available to help, or may not be trained to administer first aid. The Need. The Aruna Shanbaug Case: Another Dismal Tale of Women Abuse at Workplaces. What can be easily regarded as, ‘India’s longest running tragic story’, has finally come to an end, with the death of Aruna Shanbaug in the early-morning hours of 18th of May 2015. 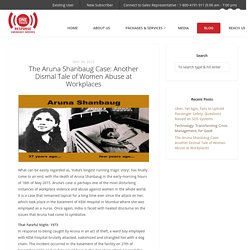 Aruna’s case is perhaps one of the most disturbing instances of workplace violence and abuse against women in the whole world. It is a case that remained topical for a long time ever since the attack on her, which took place in the basement of KEM Hospital in Mumbai where she was employed as a nurse. Once again, India is faced with heated discourse on the issues that Aruna had come to symbolize.