IPL 2020: Is the IPL’s bio-bubble a safe zone? - cricket - Hindustan Times. Harbhajan Singh became the second Chennai Super Kings player after Suresh Raina to withdraw from the Indian Premier League, tweeting on Friday that ‘personal reasons’ compelled him to take the decision. 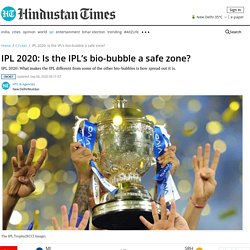 This comes right after Raina explained his withdrawal, stating he wasn’t comfortable with the bio-bubble set up for IPL players in the UAE. Also Follow | IPL 2020 Full Coverage “When the bio-bubble is not safe how does one take a chance? I have a family with two little kids and elderly parents. For me returning to the family was more important,” Raina told Outlook. Set to start on September 19, the IPL’s build-up has been less than ideal. Also Read | Younger guys will feel little less pressure in empty stadium but its a challenge for seniors: Katich Notable players like Kane Richardson and Lasith Malinga cited different reasons for withdrawing from the tournament but there is no denying the overwhelming sense of apprehension and anxiousness surrounding the event. 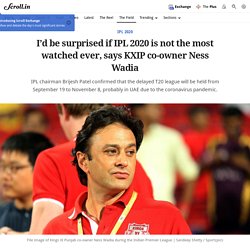 Wadia’s comments came after IPL chairman Brijesh Patel confirmed that the T20 league will be held from September 19 to November 8. All teams are now awaiting the Standard Operating Procedure from the BCCI, which will finalise the logistics in the IPL Governing Council meet next week. “Strict safety protocols have to be put in place both for off-field and on-field activities to make the IPL safe and successful. They should not be compromised at all,” Wadia told PTI.

“I would want as much testing as possible and preferably daily. One positive case and IPL could be doomed: Ness Wadia calling for strict compliance with BCCI SOP. By: PTI | New Delhi | August 6, 2020 12:17:15 pm. 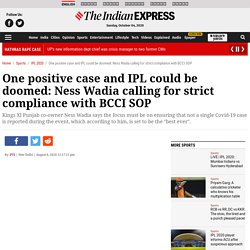 Only Those Who Are Really Required To Be With Players Should Be Part Of Bio-Bubble, Says KXIP Co-Owner Ness Wadia. Kings XI Punjab co-owner Ness Wadia on Thursday said the COVID-19 positive cases in the Chennai Super Kings contingent could have hit any of the eight franchises and wants only those people in the IPL bio-bubble who are "really required" to be with the players. 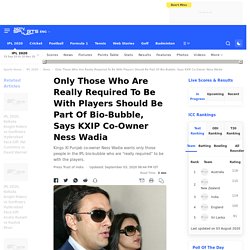 Thirteen members of the CSK contingent, including two players, tested positive for the virus last week, raising safety concerns for the tournament taking place in the UAE amid the pandemic. "The CSK incident has taught us that it can happen to anyone even when the best of precautions are taken and therefore we must be more compliant and rigid on the bio-bubble protocols.

We need to ensure only those who are really required to be with the players are part of the bubble," Wadia told PTI. The franchisees' non-player and non-coaching staff includes team operations manager, and social media specialists. "I am very comfortable interacting on Zoom and other (online communication platforms). " Even NBA players have tested positive. Promoted. IPL 2020, DC vs KXIP: Kings XI Punjab Co-Owner Ness Wadia Wants Better Umpiring After Controversial Decicion. After Preity Zinta, now Kings XI Punjab co-owner Ness Wadia has also questioned why technology isn't being put to use to reduce umpiring errors. 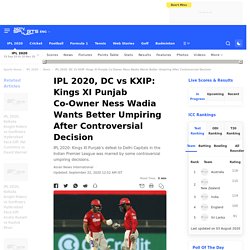 This after KXIP saw a run deducted from their score in the 19th over in the game on Sunday against Delhi Capitals. It ultimately saw them losing the match in the Super Over after the scores were tied. "It is exceedingly unfortunate that today with tremendous use of technology, we still do not use technology to ensure the total fairness and transparency in cricket games like several other leagues across the world including EPL, NBA, etc", he said in a statement. "VAR has become something which is used across the world. The game of yesterday in question between Kings XI and Delhi had two umpiring mistakes which cost KXIP the game.

He went on to request the BCCI to use the best possible technology to eradicate such errors. Kings XI Punjab have reported the umpiring howler they had to endure. Promoted. Ness wadia News: Ness wadia Latest News and Headlines Today. One positive case and IPL could be doomed: Ness Wadia calling for strict compliance with BCCI SOP.

Ness Wadia. It’s IPL, not Chinese Premier League: Ness Wadia wants BCCI to gradually sever ties with Chinese sponsors. IPL 2020 will be most watched event: Kings XI Punjab owner Ness Wadia. The Indian Premier League (IPL), which starts from September 19 in the UAE, will not only help the financials of all the stakeholders but, more importantly, also lift the spirits of the nation, Ness Wadia, owner of Kings XI Punjab, said. 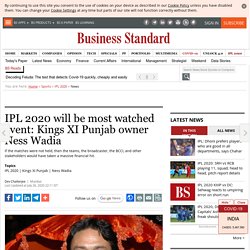 “The Board of Control for Cricket in India (BCCI) and the teams are putting a lot of efforts to make the league a success. The event will positively impact the mood and sentiment of the nation, which is under a lockdown since March,” Wadia said. If the matches were not held, then the teams, the broadcaster, the BCCI, and other stakeholders would have taken a massive financial hit. Star would have lost Rs 3,500 crore this year as it had won the bid to broadcast the event for five years. IPL 2020 : 'Small number of fans can be allowed in IPL 2020', says KingsXI Punjab's Ness Wadia.

‘‘The decision finally rests with the UAE government and the safety protocols there. 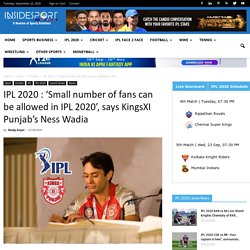 I am told they have very sophisticated testing machinery there and even if they can look at a smaller percentage of fans as the NBA are doing it, it will be good. However, all of us want an uninterrupted IPL first’’ said Wadia to Gulf News. ‘‘I maintain that if not daily, do the testing every second day. The reason being there is a difference between those who are tested and those who are not…we have to remember that we are playing under very difficult circumstances. We cannot afford to have any doubts about anyone.’’ Also Read : IPL 2020 : All you want to know about IPL 2020 schedule, rules players and franchise will follow this IPL Meanwhile ECB has declared that UAE might consider allowing spectators in stadiums if the Board of Cricket Control of India (BCCI) gives its consent.