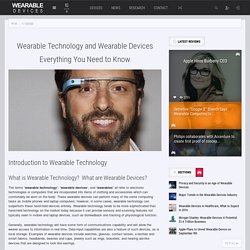 What are Wearable Devices? The terms “wearable technology“, “wearable devices“, and “wearables” all refer to electronic technologies or computers that are incorporated into items of clothing and accessories which can comfortably be worn on the body. Security an afterthought in connected home, wearable devices. Based on an extensive review of publicly reported internet of things (IoT) device vulnerabilities, the Online Trust Alliance (OTA) today announced that all of the problems could have been easily avoided. 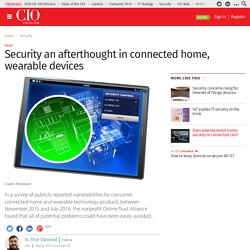 "In this rush to bring connected devices to market, security and privacy is often being overlooked," Craig Spiezle, executive director and president of the OTA, said in a statement today. "If businesses do not make a systematic change, we risk seeing the weaponization of these devices and an erosion of consumer confidence impacting the IoT industry on a whole due to their security and privacy shortcomings. " If only they had listened ... Best wearable tech of 2016. Wearable Technologies is the pioneer and worldwide leading innovation and market development platform for technologies worn close to the body, on the body or even in the body. Why Wearable Tech Will Be as Big as the Smartphone. “How do you spell Mantle?” 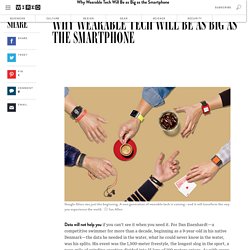 Starner asks. He types the name on a one-handed keyboard (a “Twiddler” that used combinations of 12 buttons to span the whole range of characters) and peers into his eye-screen. “I’m getting a lot of hits on that,” he says, a touch of nervousness in his voice. “So did he,” Safer retorts. The year was 1997, and the task took Starner far longer than he’d hoped.