ChildObesity180. Childhood Obesity. Most Parents of Obese Children Think Their Kids Are ‘Just Right’ Parents of obese kids often don’t recognize that their kids are overweight, and the vast majority think their obese children are “just right,” according to a new study. 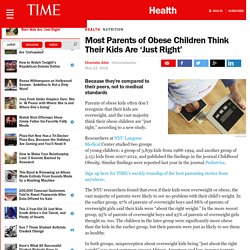 Researchers at NYU Langone Medical Center studied two groups of young children: a group of 3,839 kids from 1988-1994, and another group of 3,151 kids from 2007-2012, and published the findings in the journal Childhood Obesity. Similar findings were reported last year in the journal Pediatrics. Sign up here for TIME’s weekly roundup of the best parenting stories from anywhere. The NYU researchers found that even if their kids were overweight or obese, the vast majority of parents were likely to see no problem with their child’s weight. In the earlier group, 97% of parents of overweight boys and 88% of parents of overweight girls said their kids were “about the right weight.” Obesity in America: Photos From the Early Days of a National Health Crisis Martha Holmes—The LIFE Picture Collection/Getty Images Caption from LIFE. 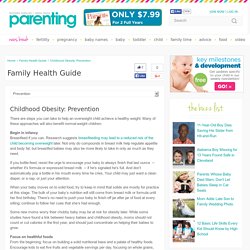 Many of these approaches will also benefit normal-weight children: Begin in infancy Breastfeed if you can. Research suggests breastfeeding may lead to a reduced risk of the child becoming overweight later. Not only do compounds in breast milk help regulate appetite and body fat, but breastfed babies may also be more likely to take in only as much as they need. If you bottle-feed, resist the urge to encourage your baby to always finish that last ounce -- whether it's formula or expressed breast milk -- if he's signaled he's full. When your baby moves on to solid food, try to keep in mind that solids are mostly for practice at this stage. Some new moms worry their chubby baby may be at risk for obesity later. Focus on healthful foods From the beginning, focus on building a solid nutritional base and a palate of healthy foods. Try these 10 superfoods for kids Encourage physical activity Get your kids moving! 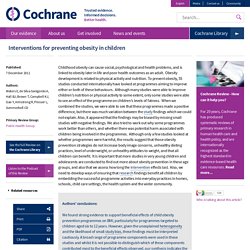 However, given the unexplained heterogeneity and the likelihood of small study bias, these findings must be interpreted cautiously. A broad range of programme components were used in these studies and whilst it is not possible to distinguish which of these components contributed most to the beneficial effects observed, our synthesis indicates the following to be promising policies and strategies: · school curriculum that includes healthy eating, physical activity and body image · increased sessions for physical activity and the development of fundamental movement skills throughout the school week · improvements in nutritional quality of the food supply in schools · environments and cultural practices that support children eating healthier foods and being active throughout each day. 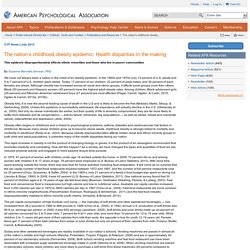 In the 1960s and 1970s only 13 percent of U.S. adults and 5 to 7 percent of U.S. children were obese. Today, 17 percent of our children, 32 percent of adult males, and 36 percent of adult females are obese. Although obesity has increased across all racial and ethnic groups, it affects some groups more than others. Black (50 percent) and Hispanic women (45 percent) have the highest adult obesity rates. Among children, Black adolescent girls (29 percent) and Mexican-American adolescent boys (27 percent) are most affected (Flegal, Carroll, Ogden, & Curtin, 2010; Ogden & Carroll, 2010a, 2010b). Obesity kills; it is now the second leading cause of death in the U.S.and is likely to become the first (Mokdad, Marks, Stroup, & Gerberding, 2004).

Obesity often begins in childhood and is linked to psychological problems, asthma, diabetes and cardiovascular risk factors in childhood. References.