Short Guy Central. Crush Sweet Jewels Android App Review. If you are a die hard Candy Crush fan, then you've probably played every other iteration of the game that exists, maybe on different platforms to boot. 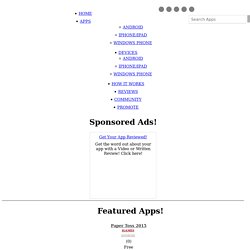 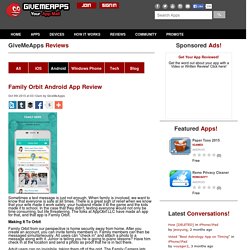 When family is involved, we want to know that everyone is safe at all times. There is a great sigh of relief when we know that your wife made it work safely, your husband made it to the game and the kids made it to school. In the case that they didn't, texting everyone would not only be time consuming, but life threatening. Backlash Gets Heightist Article Pulled Off Thought Catalog. 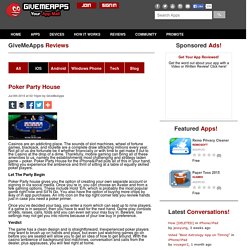 The sounds of slot machines, wheel of fortune games, blackjack, and roulette are a complete draw attracting millions every year. Not all of us are fortunate be it whether financially or with time to get make it out to the Casino at the drop of a dime. Thankfully, mobile gaming can bring all of these amenities to us, namely the establishments most challenging and strategy laden game – poker. Poker Party House for the iPhone&iPad puts all of this in your hand, letting you experience the ambience and thrill of sitting at a table of equally skilled poker players. Let The Party Begin Poker Party house gives you the option of creating your own separate account or signing in via social media. GiveMeApps Reviews Tech. Born2Invest Android App Review. Some of us look forward to picking up today’s paper, logging online to a plethora of news sites, or even depending on word of mouth for solid, current business and financial news and tips. 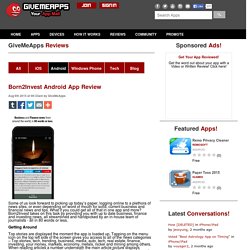 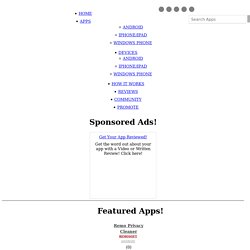 No longer did we have to pick up a phone or beep someone to contact them, but we could send messages and forget about them, making conversations more convenient and on our time. Then the Social Media juggernauts followed. 2003 brought MySpace and Facebook followed a year later. Nowadays, there is no escaping the Social Media landscape. However, along with that went our Privacy. How Did He Know? iPhone/iPad App Review. If there’s anything that men usually fail at when it comes to relationships, it’s remembering significant dates, what our significant other likes, other peculiarities and knowing how to communicate with her when she’s at her most vulnerable. 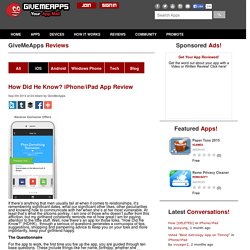 At least that’s what the sitcoms portray. I am one of those who doesn’t suffer from this affliction, but my girlfriend constantly reminds me of how great I am for paying attention to the little stuff. GiveMeApps Reviews Windows Phone. Once upon a time, being able to chat on your computer was a huge deal. 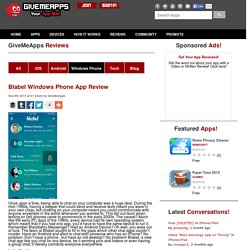 During the mid–1990s, having a beeper that could send and receive texts meant you were in your own class, but chatting on your computer meant you could communicate with anyone anywhere in the world whenever you wanted to. This fell out favor when texting on cell phones came to prominence in the early 2000s. The caveat? Much like the early PC days of the 1980s, every device had its own operating system, which meant that if you had one app, you’d have to have the same device to run it. Remember Blackberry Messenger? Bumpy Rider iPhone/iPad App Review. Bumpy Rider iPhone/iPad App Review Sep 14th 2015 at 03:38pm by GiveMeApps What's old is new again as game developers aim to recreate the 8 bit heyday of the 1980s with retro themed 8 bit graphic with bleep and bloop SID ‐like music. 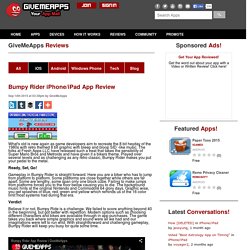 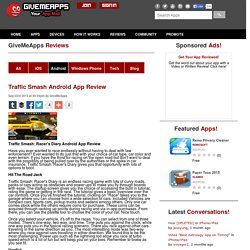 Ever wanted to do just that with your choice of car type, car color and even terrain. If you have the thirst for racing on the open road but don't want to deal with the possiblity of being pulled over by the authorities or the spike in car insurance, Traffic Smash: Racer's Diary gives you that opportunity with lots of options to boot. Hit The Road Jack. GiveMeApps Reviews Android. If you're in need of your retro gaming fix and want that in the order of dozens of challenging levels, surprises and "what in the worlds? 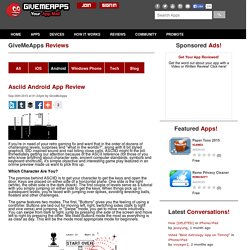 ", along with 8 bit styled graphics, SID inspired sound and nail biting close calls, ASCIID might fit the bill. Immediately getting our attention because of the ASCII reference (for those of you who know anything about character sets, ancient computer standards, symbols and keyboard shortcuts), it's simple objective and interesting game play featured in an online preview made us want to pick this up. Which Character Are You? The premise behind ASCIID is to get your character to get the keys and open the door. Keys are placed on either side of a horizontal plane. The game features two modes. Hit an obstacle and blood will spatter everywhere | ASCIID for iOS & Android.