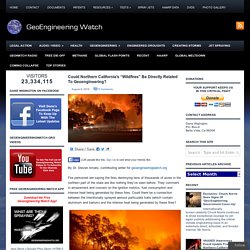 Steven Amato, contributing writer for geoengineeringwatch.org Fire personnel are saying the fires destroying tens of thousands of acres in the northern part of the state are like nothing they’ve seen before. They comment in amazement and concern on the ignition metrics, fuel consumption and intense heat being generated by these fires. Could there be a connection between the intentionally sprayed aerosol particulate trails (which contain aluminum and barium) and the intense heat being generated by these fires? A fire truck moves position as flames from the Rocky fire approach near Clearlake, California. US-developed weapon system may cause global warming: Government. NEW DELHI: A US-developed weapon system that strikes the atmosphere with a focussed electromagnetic beam may cause global warming, the government today said and acknowledged that climate change is likely to reduce the yield of major crops like wheat and maize in India. 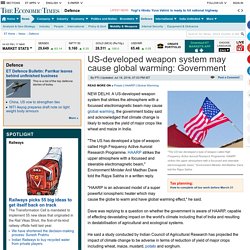 "The US has developed a type of weapon called High Frequency Active Auroral Research Programme. HAARP strikes the upper atmosphere with a focussed and steerable electromagnetic beam," Environment Minister Anil Madhav Dave told the Rajya Sabha in a written reply. "HAARP is an advanced model of a super powerful ionospheric heater which may cause the globe to warm and have global warming effect," he said. Dave was replying to a question on whether the government is aware of HAARP, capable of effecting devastating impact on the world's climate including that of India and resulting in destabilisation of agricultural and ecological systems. Hagelabwehr Krems, Niederösterreich - Einsatzvideo. Markus Duwe Pilot im Hagelflieger. Galileo Big Pictures über Chemtrails früher Lüge heute Wahrheit.