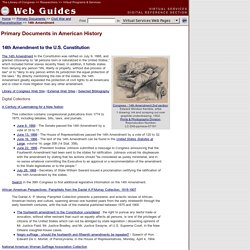 In addition, it forbids states from denying any person "life, liberty or property, without due process of law" or to "deny to any person within its jurisdiction the equal protection of the laws.” By directly mentioning the role of the states, the 14th Amendment greatly expanded the protection of civil rights to all Americans and is cited in more litigation than any other amendment. Library of Congress Web Site | External Web Sites | Selected Bibliography A Century of Lawmaking for a New Nation This collection contains congressional publications from 1774 to 1875, including debates, bills, laws, and journals. 1924 Racial Integrity Act · You Have No Right: Law & Justice in Virginia · Library of Virginia. Court Precedents - The Road to Conquering Prejudice: Loving v. Virginia. Groundbreaking Interracial Marriage. "I think marrying who you want is a right no man should have anything to do with. 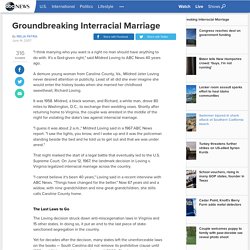 It's a God-given right," said Mildred Loving to ABC News 40 years ago. A demure young woman from Caroline County, Va., Mildred Jeter Loving never desired attention or publicity. Least of all did she ever imagine she would enter the history books when she married her childhood sweetheart, Richard Loving. Loving v. Virginia compared to gay marriage arguments. Photo by Alex Wong/Getty Images June 12, 2015, marks the 48th anniversary of Loving v. 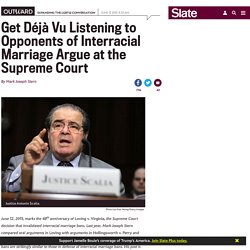 Virginia, the Supreme Court decision that invalidated interracial marriage bans. Last year, Mark Joseph Stern compared oral arguments in Loving with arguments in Hollingsworth v. Perry and United States v. Windsor, noting that the arguments in defense of gay marriage bans are strikingly similar to those in defense of interracial marriage bans. Summary & Significance. Loving Decision: 40 Years of Legal Interracial Unions. "Loving v. Virginia" Is Relevant Nearly 50 Years Later. Yes, the photo above is everyone at our wedding except my friend and photographer, Andrew Haworth, and his wife. 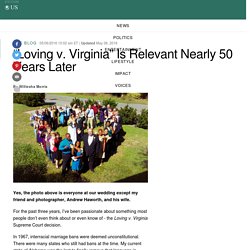 For the past three years, I’ve been passionate about something most people don’t even think about or even know of - the Loving v. Virginia Supreme Court decision. FindLaw: Cases and Codes. Justia U.S. Supreme Court Center. LOVING v. VIRGINIA. LOVING v. 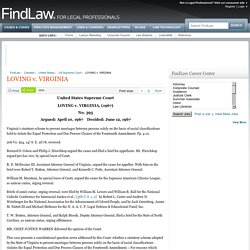 VIRGINIA, (1967) No. 395 Argued: April 10, 1967 Decided: June 12, 1967 Virginia's statutory scheme to prevent marriages between persons solely on the basis of racial classifications held to violate the Equal Protection and Due Process Clauses of the Fourteenth Amendment. The Lovings: A Couple That Changed History. Loving Decision: 40 Years of Legal Interracial Unions. Loving v Virginia: What You Didn't Know About Its History. When the Supreme Court heard arguments in the case Loving v. the Commonwealth of Virginia, defendants Richard and Mildred Loving chose not to appear in person. 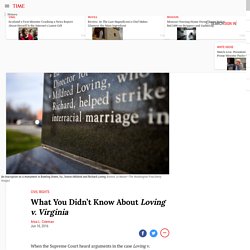 In 1958, they had been convicted for the felony of miscegenation. As lawyers presented their arguments, 17 states remained steadfast in their refusal to repeal such laws banning interracial marriages. But, though he did not attend the arguments, Richard sent a message to the justices: “Tell the Court I love my wife and it is just not fair that I cannot live with her in Virginia.” The justices unanimously agreed. On June 12, 1967, proscriptions against interracial marriage were declared unconstitutional. 'Loving' Movie Shows We Still Need Progress on Race - Motto. The film tells the story of Mildred Jeter and Richard Loving. 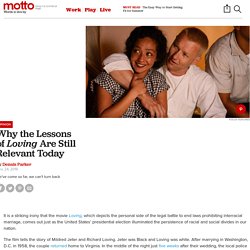 Jeter was Black and Loving was white. After marrying in Washington, D.C. in 1958, the couple returned home to Virginia. In the middle of the night just five weeks after their wedding, the local police raided their home and arrested them for daring to live as man and wife. The couple pled guilty to breaking the state’s Racial Integrity Act, and a local judge gave them a choice: Leave Virginia or go to prison. Loving.