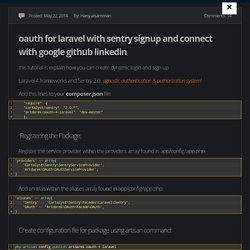 Add this lines to your composer.json file: Registering the Package: Register the service provider within the providers array found in app/config/app.php: 'providers' => array( 'Cartalyst\Sentry\SentryServiceProvider', 'Artdarek\OAuth\OAuthServiceProvider', ) Add an alias within the aliases array found in app/config/app.php: Laracasts/flash. Rajiv Seelam, I'm – API Token Authentication with Laravel and Sentry... In last one, part1 we discussed for demonstration purposes how to Authenticate with API Token using Sentry. 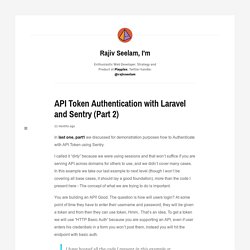 I called it “dirty” because we were using sessions and that won’t suffice if you are serving API across domains for others to use, and we didn’t cover many cases. In this example we take our last example to next level (though I won’t be covering all base cases, it should lay a good foundation), more than the code I present here - The concept of what we are trying to do is important. You are building an API! Naomiaro. When are you upgrading to Laravel 5 (or have you already?) : laravel. Definitive Laravel 4 to Laravel 5 Migration Guide - Slashnode. We like to stay on the cutting edge, so when Laravel 5 was released in February 2015, it wasn’t a question of whether or not we would migrate our 4.x applications across… it was just a matter of when. 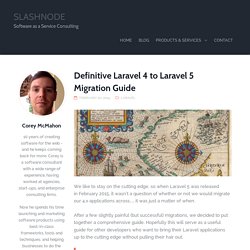 After a few slightly painful (but successful) migrations, we decided to put together a comprehensive guide. Hopefully this will serve as a useful guide for other developers who want to bring their Laravel applications up to the cutting edge without pulling their hair out. DisclaimerThis is a work in progress.Use it in conjunction with your own common sense, and please report back if you have any suggestions or additions. What’s changed? Laravel 5 is a natural progression from 4.x. While there are a lot of similarities with older versions, there are some fundamental changes that make migration non-trivial. Migrating from 4.x to 5 The official recommendation is to not bother directly migrating 4.x applications to 5. There isn’t a clear answer as to which method is easier. Step 1. Step 2. . $ cp .. A curated list of delightful Laravel PHP framework packages and resources. Build A Link Sharing Website With Laravel - Vegibit. 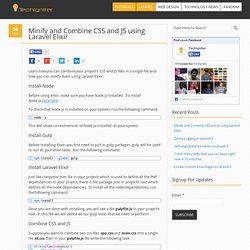 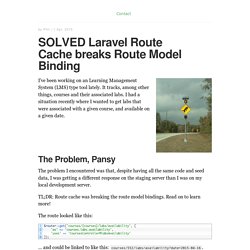 It tracks, among other things, courses and their associated labs. I had a situation recently where I wanted to get labs that were associated with a given course, and available on a given date. The Problem, Pansy The problem I encountered was that, despite having all the same code and seed data, I was getting a different response on the staging server than I was on my local development server.

TL;DR: Route cache was breaking the route model bindings. The route looked like this: $router->get('courses/{courses}/labs/availability', [ 'as' => 'courses.labs.availability', 'uses' => 'CoursesController@labsAvailability' ]); Improving the performance of a laravel application. We're developing in Laravel, which has a huge code base that can make your application run slower with more than 200ms. 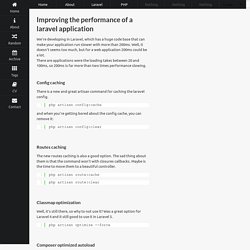 Well, it doesn't seems too much, but for a web application 200ms could be a lot. There are applications were the loading takes between 20 and 100ms, so 200ms is far more than two times performance slowing. Caching routes using filters in Laravel 4 - Mark van Eijk. Caching in Laravel can be done in many ways and on many levels of coding. 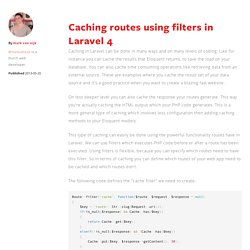 Like for instance you can cache the results that Eloquent returns, to save the load on your database. You can also cache time consuming operations like retrieving data from an external source. Caching routes with Laravel 4. Yesterday I blogged about how I organise my Laravel routes within my Laravel applications, this post is a follow on to more route goodness. 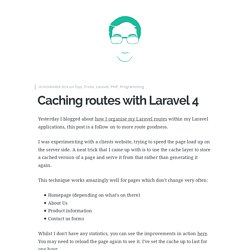 I was experimenting with a clients website, trying to speed the page load up on the server side. A neat trick that I came up with is to use the cache layer to store a cached version of a page and serve it from that rather than generating it again. This technique works amazingly well for pages which don't change very often: Homepage (depending on what's on there)About UsProduct informationContact us forms.

Using Datatables with Laravel - Wern Ancheta. In this tutorial I’ll be walking you through how you can use datatables in Laravel. 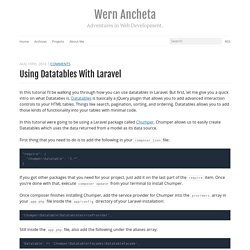 But first, let me give you a quick intro on what Datatabes is. Datatables is basically a jQuery plugin that allows you to add advanced interaction controls to your HTML tables. Things like search, pagination, sorting, and ordering. JeffreyWay/Laravel-4-Generators. Barryvdh/laravel-debugbar at 1.8. Rocketeer - The fast deployer for modern applications. Installing Rocketeer on a project is quite easy, there are several ways to do so. 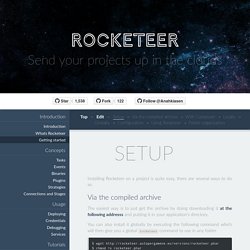 Via the compiled archive The easiest way is to just get the archive by doing downloading it at the following addresss and putting it in your application's directory. You can also install it globally by executing the following command which will then give you a global rocketeer command to use in any folder. Deploy Your Website Using Laravel and Git. You can’t be a successful web developer without using some sort of deployment workflow for your websites. It doesn’t matter how good or bad your workflow might be. If you can’t get your website up to production then your client will never pay you for your hard work. Easy PHP Deployment with Rocketeer. Rocketeer is a command line PHP deployment tool. I have used Capistrano for deployment in the past, and really enjoyed using it. Rocketeer is very similar to Capistrano. It’s extremely easy to set-up, and is a breeze to work with. I have provided the basic instructions on setting up and configuring Rocketeer below.

Example Apache VHOST (Web server): <VirtualHost *:80> DocumentRoot /var/www/example/current </VirtualHost> Need to have mcrypt library installed on the server that the site will be deployed too (Centos Install Instructions) wget wget sudo rpm -Uvh remi-release-6*.rpm epel-release-6*.rpm yum update yum install php-mcrypt* Using Rocketeer for Easy Deployment to VPS. In this blog, I will be referring to Laravel deployments in particular; however, Rocketeer was designed to be framework agnostic and so the general principles should be transferrable to any deployment scenario. The primary goal of Rocketeer is to interface with your source code manager (SCM) and transfer code (from your SCM) to your deployment folder. It is important that you understand this – Rocketeer does NOT transfer code directly via ssh/scp. You MUST use an SCM (git/cvn).

In the Laravel context, It also performs other tasks like running migrations, installing composer dependencies etc. The flexibility provided by Rocketeer is particularly enticing in a VPS scenario. Step 1: Prep the laravel app under question – Include the dependency on rocketeer, add the provider and finally add and commit all code to your local git repository.