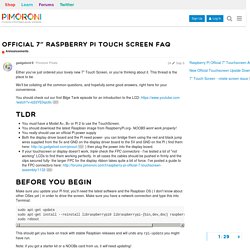 This thread is the place to be. We'll be collating all the common questions, and hopefully some good answers, right here for your convenience. You should check out our first Bilge Tank episode for an introduction to the LCD: You must have a Model A+, B+ or Pi 2 to use the TouchScreen.You should download the latest Raspbian image from RaspberryPi.org- NOOBS wont work properly! Raspberry Pi Touchscreen Calibration and Rotation Tutorial. Touchscreen Rotation and Calibration In the previous article, I described the steps needed to install an LCD touchscreen on the Raspberry Pi. 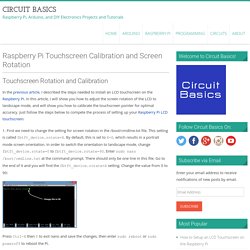 Make Your Own Transparent Tablet PC. Adafruit PiTFT - Assembled 480x320 3.5" TFT+Touchscreen for Raspberry Pi. Official Raspberry Pi Screen Launched. Connecting an iPad retina LCD to a PC. Update: please read this post This project was born at the Warsaw Hackerspace, it was funded by my friend Spin, who wanted to use the display in a project of his. 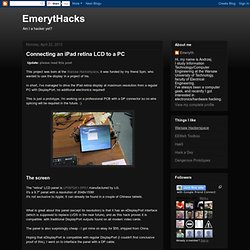 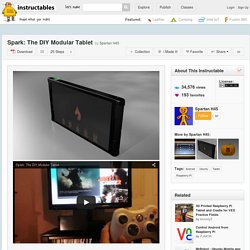 Raspitab – the first tablet with Raspberry Pi inside by Henrik Warrer. Risks and challenges. 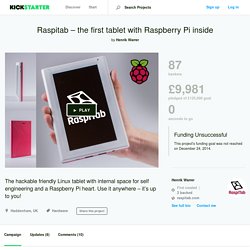 MICHAEL K CASTOR. DukePad - OpenJFX - OpenJDK Wiki. The DukePad is a Do-It-Yourself, make-at-home tablet computer based on the Raspberry PI and JavaSE Embedded 8. 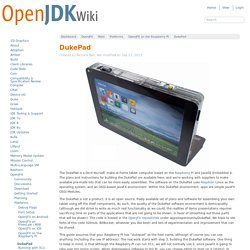 The plans and instructions for building the DukePad are available here, and we're working with suppliers to make available pre-made kits that can be more easily assembled. The software on the DukePad uses Raspbian Linux as the operating system, and an OSGi-based JavaFX environment. Within this DukePad environment, apps are simple JavaFX OSGi Modules. The DukePad is not a product, it is an open source, freely available set of plans and software for assembling your own tablet using off the shelf components.

As such, the quality of the DukePad software environment is demo-quality (although we did strive to write as much real functionality as we could, the realities of demo presentations requires sacrificing time on parts of the applications that are not going to be shown, in favor of smoothing out those parts that will be shown). Software First, get the proper packages: Hardware. Android tablet to Android PC Desktop. If we are going to add US and China's Electronic waste, 6 Million tons of computers, phones and electronic parts are disposed yearly [wiki]. 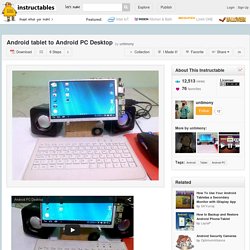 I decided to turn my old Android tablet with broken touch panel into Android PC Desktop using simple hack and recycling. And viola, I just made a mini PC with most popular Linux operating sytem that can execute browsing, spread sheet, media player, games, editing, programming etc. This simple hack can be applied to any android tablet that has USB host capability or you can use USB otg. DIY tablet: Powerful, Easy-to-make, (relatively) cheap [Part 1: the guts] Hi everyone! 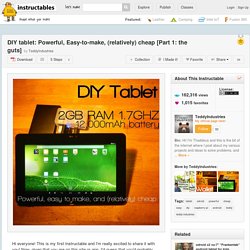 This is my first Instructable and I'm really excited to share it with you! Now, given that you are on this site or app, I'd guess that you'd probably have at least one idea that hit you like a baseball bat and then occupied the outer fringes of your neocortex ever since. Build a Tablet Binder With the Raspberry Pi. Hello world, Pure Carbon here with another instructable. 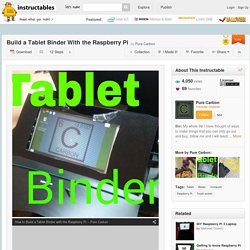 Today I will show you how to build a tablet binder hybrid which you can use for school, work, play, etc. This project is based around the Raspberry pi which if you don't already know is a credit card sized computer that costs around $35. This computer, originally designed to teach kids programing, but has been used in all sorts of different projects ranging from home automation to cameras. The Pi has also been to space and has explored open waters of the ocean.

Todays project has been a work in progress for some time now and has required lots of planning before making it a reality, and its not done! DIY Tablet 2.0 - All. The case was created from laser-cut and 3D printed parts. 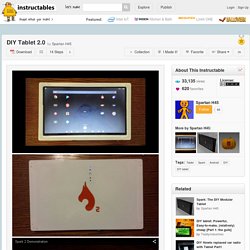 -The attached .STL file is for the 3D printed corners. (printed with ABS plastic) - The attached .EPS file is for the rest of the laser cut case. (laser cut with a 31in. x 15in. sheet of white acrylic) I decided to switch from having the case completely 3D printed to only 3D printing the parts that I felt were necessary, and laser cutting the rest. The cost of the laser cut and 3D printed parts was omitted, because depending on where you have your parts made and what materials you choose to use, the cost can vary.