Brazil World Cup Fails to Score Environmental Goals. RIO DE JANEIRO – It was supposed to be the "Copa Verde," a celebration of the greenest World Cup ever, in the country that's home to the Amazon, ranked first in biodiversity, vital to how the world responds to climate change. 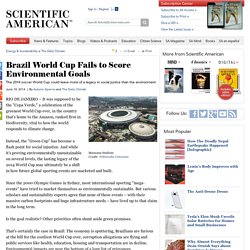 Instead, the "Green Cup" has become a flash point for social injustice. And while it's proving environmentally unsustainable on several levels, the lasting legacy of the 2014 World Cup may ultimately be a shift in how future global sporting events are marketed and built. Since the 2000 Olympic Games in Sydney, most international sporting "mega-events" have tried to market themselves as environmentally sustainable. But various scholars and sustainability experts agree that none of these events – with their massive carbon footprints and huge infrastructure needs – have lived up to that claim in the long term. Bmi_cr_geography_brazil.png (PNG Image, 307 × 311 pixels) Brazil Issues Rules for Anti-Bribery Law - Risk & Compliance. Explicit cookie consent. A MORIBUND economy. 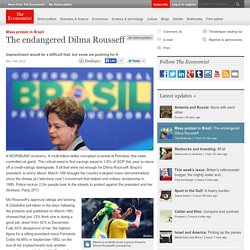 A multi-billion-dollar corruption scandal at Petrobas (the state-controlled oil giant). The critical need to find savings equal to 1.8% of GDP this year to stave off a credit-ratings downgrade. If all that were not enough for Dilma Rousseff, Brazil’s president, to worry about, March 15th brought the country's largest mass demonstrations since the diretas já (“elections now”) movement that helped end military dictatorship in 1985. Police reckon 2.2m people took to the streets to protest against the president and her Workers’ Party (PT).

Ms Rousseff’s approval ratings are tanking. This remains a remote possibility. The World Cup Exposes Brazil's Injustices  On June 12th the World Cup kicks off in Brazil; the country has been beset by protest in the run up to the tournament. 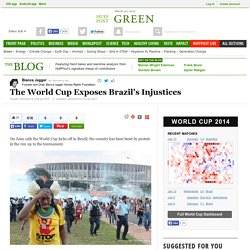 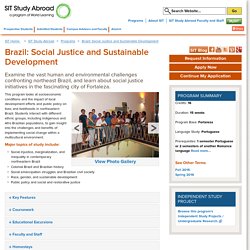 He received his BA in political science and international relations in 1978 and went on to earn his MA in Latin American studies from the University of Wisconsin-Madison in 1980. While attending the University of Wisconsin Law School, Mr. A million protest in Brazil against corruption and social injustice. About a million people took to the streets of 100 Brazilian cities last week, and their protests against corruption and social and economic injustice saw their first two deaths. 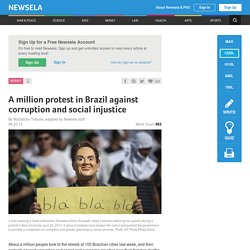 Violence broke out in more than 10 cities late Thursday and early Friday. An 18-year-old man was killed and three people injured when they were hit by a car trying to drive around a protest barricade in Ribeirao Preto, 185 miles north of Sao Paolo. On Friday, a second person died of a heart attack after a tear-gas canister exploded near her, according to Brazilian news agencies. A country of injustice. Amélia Cohn IBASE (Coordination) - Atila Roque and Sonia Correa; CEDEC - Amélia Cohn; FASE - Jorge Eduardo Durao; INESC - Wellington Almeida; SOS-Corpo - Ana Paula. 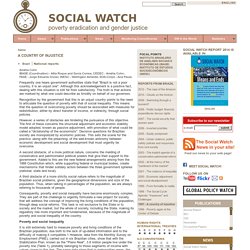 Frequently one hears government authorities state that "Brazil is not a poor country, it is an unjust one". Although this acknowledgement is a positive fact, dealing with this situation is still far from satisfactory. Mayra Avellar Neves - TheXtraordinary. Mayra also became famous for organizing a number of non-violent protests along with hundreds of children from the slum areas of Rio, which prompted the Brazilian government to do something about the situation. 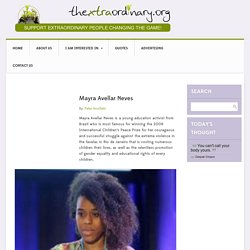 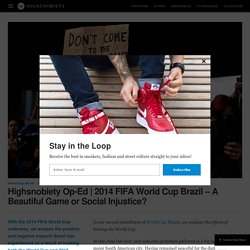 In late June last year, over 200,000 protesters gathered in a big square in a major South American city. Having remained peaceful for the duration, the rally boiled over and turned violent towards the end, causing riot police to fire tear gas at the crowds and declare Martial law to gain control of the situation. In recent years, this could have been the scene in many dissatisfied countries.

Political corruption, severe austerity policies and anti-democratic coups are, unfortunately, a dime a dozen this side of the millennium. Since the Arab Spring in 2011, similar gatherings can potentially bring down governments and give hope to oppressed citizens. But this particular rally, on the streets of Rio de Janeiro, was not opposing a dictatorial regime or protesting against nuclear arms.

Perhaps the Olympics make more sense. Inequality, environmental injustice, and racism in Brazil: beyond the question of colour. Tania Pacheco* In order to work with machines, the worker must start his apprenticeship very early, so that he can adapt his own movements to the uniform and continuous movement of an automaton. 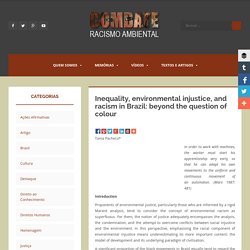 (Marx 1987: 481) Introduction Proponents of environmental justice, particularly those who are informed by a rigid Marxist analysis, tend to consider the concept of environmental racism as superfluous. For them, the notion of justice adequately encompasses the analysis, the condemnation, and the attempt to overcome conflicts between social injustice and the environment. 'There will have been no World Cup' Story highlights There were two ways to interpret the chant and hashtag #NaoVaiTerCopa ("There will be no World Cup") which first emerged during the protests that rocked the Confederations Cup in Brazil in June 2013. 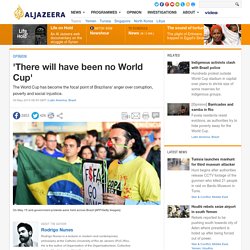 One was conditional. If there were no response to the issues drawing millions to the streets - poor public transport and social services, rampant property speculation, police brutality, lack of political accountability - authorities should expect even greater resistance in 2014. Facing Racism In Brazil: Black Like Me  I'm not going to start this article saying that I'm the daughter of a white mother and a black father, because--well, it's a little bit like that, but not exactly.

My mother is what we usually call a morena, with straight hair and a bit more of an indigenous appearance (and we know that straight hair automatically makes a Brazilian white). My dad was black, with white features (or "finer" features, as people would say about him).