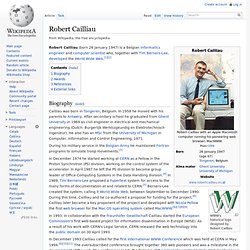 In 1958 he moved with his parents to Antwerp. After secondary school he graduated from Ghent University in 1969 as civil engineer in electrical and mechanical engineering (Dutch: Burgerlijk Werktuigkundig en Elektrotechnisch ingenieur). He also has an MSc from the University of Michigan in Computer, Information and Control Engineering, 1971. During his military service in the Belgian Army he maintained Fortran programs to simulate troop movements.[3] In December 1974 he started working at CERN as a Fellow in the Proton Synchrotron (PS) division, working on the control system of the accelerator.

In 1993, in collaboration with the Fraunhofer Gesellschaft Cailliau started the European Commission's first web-based project for information dissemination in Europe (WISE). Awards[edit] References[edit] External links[edit] Linus torvald. Tim Berners-Lee. Marc Andreessen. Early life and education[edit] Andreessen was born in Cedar Falls, Iowa, and raised in New Lisbon, Wisconsin,[10] the son of Patricia and Lowell Andreessen, who worked for a seed company.[11] In December 1993,[10] he received his bachelor's degree in computer science from the University of Illinois at Urbana-Champaign. 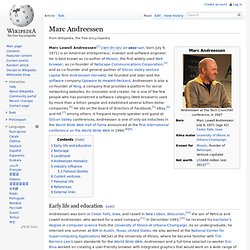 As an undergraduate, he interned one summer at IBM in Austin, Texas, United States. He also worked at the National Center for Supercomputing Applications (NCSA) at the University of Illinois, where he became familiar with Tim Berners-Lee's open standards for the World Wide Web. Andreessen and a full-time salaried co-worker Eric Bina worked on creating a user-friendly browser with integrated graphics that would work on a wide range of computers.

The resulting code was the Mosaic Web browser. Netscape[edit] After his graduation from the university in 1993, Andreessen moved to California to work at Enterprise Integration Technologies. Mark Zuckerberg. Ted Nelson. Biography[edit] Nelson is the son of Emmy Award-winning director Ralph Nelson and the Academy Award-winning actress Celeste Holm.[1] His parents' marriage was brief and he was mostly raised by his grandparents, first in Chicago and later in Greenwich Village.[2] Nelson earned a BA from Swarthmore College in 1959. 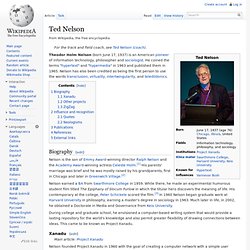 While there, he made an experimental humorous student film titled The Epiphany of Slocum Furlow in which the titular hero discovers the meaning of life. His contemporary at the college, Peter Schickele scored the film.[3] In 1960 Nelson began graduate work at Harvard University in philosophy, earning a master's degree in sociology in 1963. Much later in life, in 2002, he obtained a Doctorate in Media and Governance from Keio University. During college and graduate school, he envisioned a computer-based writing system that would provide a lasting repository for the world's knowledge and also permit greater flexibility of drawing connections between ideas.