Ahmad Ali's answer to What is the best study method? Mattermark Has Raised $2M in Our Second Seed Round — Mattermark Daily. Ten Things I Learned Researching Ten of the World’s Fastest Growing Startups. When we launched GrowthHackers.com back in late September we had a notion of doing “growth teardowns” of the fastest growing startups. 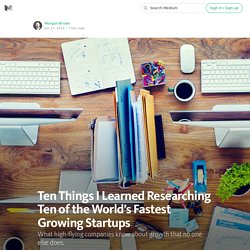 We wanted to answer the question that everyone on the outside of these rocketships wanted to know the answer to: “How did they grow so fast?” So we set to work doing deep research dives on companies like Uber, Snapchat, Yelp, LinkedIn, HubSpot, Evernote and more. By scouring the Web for interviews, videos, past profiles and more, we pulled insight from dozens of sources for each case study.

Based on our research we were able to piece together what made these companies so successful—and in the process reverse engineer their growth engine. While we certainly didn’t get everything 100% right, we received overwhelmingly positive feedback that the case studies were some of the most detailed accounts of these companies’ growth engines ever created. Lesson 1: Growth is Nothing Without the Product You’ve heard plenty about product/market fit, and for good reason.

Amazon's Whale Strategy. A week before yesterday’s launch of the Fire Phone, Amazon sent all of the attendees a copy of the children’s book “Mr. 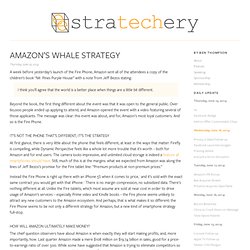 Pines Purple House” with a note from Jeff Bezos stating: I think you’ll agree that the world is a better place when things are a little bit different. Beyond the book, the first thing different about the event was that it was open to the general public. Over 60,000 people ended up applying to attend, and Amazon opened the event with a video featuring several of those applicants. The message was clear: this event was about, and for, Amazon’s most loyal customers. Industries. I was just telling the guys that about 80% of the time that I do this talk, it goes pretty well, 20% of the time it's a train wreck, so we're hoping for the 80 tonight. 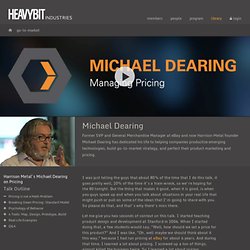 But the thing that makes it good, when it is good, is when you guys speak up and when you talk about situations in your real life that might push or pull on some of the ideas that I'm going to share with you. So please do that, and that's why there's mics there. Let me give you two seconds of context on this talk. I started teaching product design and development at Stanford in 2006. When I started doing that, a few students would say, "Well, how should we set a price for this product?

" Then that pattern of people asking me about pricing kept repeating. So why don't we dive in and we'll explore a little bit about pricing together over the next forty minutes or so.I want to start with the idea — what really stuck with me was when I realized that, holy smokes, most people think pricing is a math problem. Critiquing Disruption Theory. Much of the Internet has been abuzz about The Disruption Machine, an essay by Jill Lepore in the New Yorker that seeks to refute Clayton Christensen’s Theory of Disruptive Innovation. 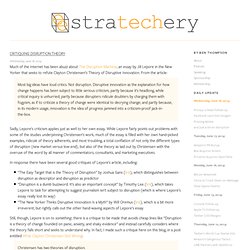 From the article: Most big ideas have loud critics. Not disruption. Disruptive innovation as the explanation for how change happens has been subject to little serious criticism, partly because it’s headlong, while critical inquiry is unhurried; partly because disrupters ridicule doubters by charging them with fogyism, as if to criticize a theory of change were identical to decrying change; and partly because, in its modern usage, innovation is the idea of progress jammed into a criticism-proof jack-in-the-box.

Sadly, Lepore’s criticism applies just as well to her own essay. What Clayton Christensen Got Wrong in his Theory of Low-End Disruption. There’s no question Clayton Christensen, who developed the theory of disruption, is Silicon Valley’s favorite business school professor. 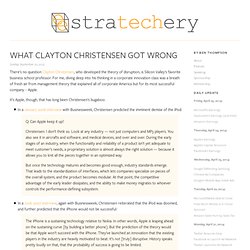 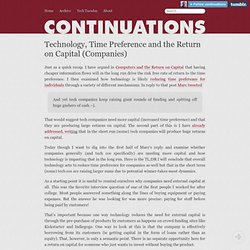 I have argued in Computers and the Return on Capital that having cheaper information flows will in the long run drive the risk free rate of return to the time preference. I then examined how technology is likely reducing time preference for individuals through a variety of different mechanisms. In reply to that post Marc tweeted And yet tech companies keep raising giant rounds of funding and spitting off huge gushers of cash :-).

That would suggest tech companies need more capital (increased time preference) and that they are producing large returns on capital. Today though I want to dig into the first half of Marc’s reply and examine whether companies generally (and tech cos specifically) are needing more capital and how technology is impacting that in the long run. As a starting point it is useful to remind ourselves why companies need external capital at all.