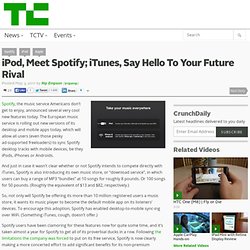 The European music service is rolling out new versions of its desktop and mobile apps today, which will allow all users (even those pesky ad-supported freeloaders) to sync Spotify desktop tracks with mobile devices, be they iPods, iPhones or Androids. And just in case it wasn’t clear whether or not Spotify intends to compete directly with iTunes, Spotify is also introducing its own music store, or “download service”, in which users can buy a range of MP3 “bundles” at 10 songs for roughly 8 pounds. Or 100 songs for 50 pounds. (Roughly the equivalent of $13 and $82, respectively.) So, not only will Spotify be offering its more than 10 million registered users a music store, it wants its music player to become the default mobile app on its listeners’ devices.

“Accessing music on your mobile phone is the future, but today that makes up a pretty small percentage of music fans. April fools. Slideshow: Top 10 Largest First Rounds for Internet Companies this Year. Forty-one million dollars for an Internet company. 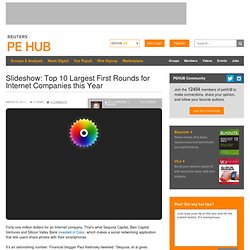 That’s what Sequoia Capital, Bain Capital Ventures and Silicon Valley Bank invested in Color, which makes a social networking application that lets users share photos with their smartphones. It’s an astonishing number. Financial blogger Paul Kedrosky tweeted: “Sequoia, et al gives pre-launch photo-sharing startup $41m, or ‘more than money than they gave Google’. That sound? Jaw hitting floor.” I did some checking in Thomson Reuters’ VC deals database and as far as I can tell, the Color deal is the largest first round for an early stage Internet service, software or content company this year and the third largest in the past 10 years. The only two companies that raised more in the past 10 years were: Volera Inc., a San Jose, Calif. 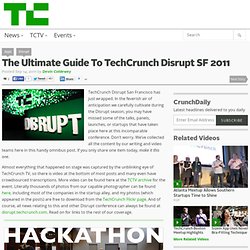 In the feverish air of anticipation we carefully cultivate during the Disrupt season, you may have missed some of the talks, panels, launches, or startups that have taken place here at this incomparable conference. Don’t worry. We’ve collected all the content by our writing and video teams here in this handy omnibus post. If you only share one item today, make it this one. Almost everything that happened on stage was captured by the unblinking eye of TechCrunch TV, so there is video at the bottom of most posts and many even have crowdsourced transcriptions.

VCs Agree: "No Bubble" ... But Is Twitter A Sign? Posted by Tom Foremski - March 10, 2011 "Double, double toil and trouble; Fire burn, and caldron bubble," chanted the witches of Shakespeare's Macbeth, cooking up trouble. 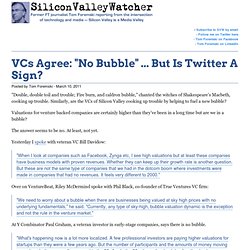 Similarly, are the VCs of Silicon Valley cooking up trouble by helping to fuel a new bubble? Valuations for venture backed companies are certainly higher than they've been in a long time but are we in a bubble? The answer seems to be no. At least, not yet. Yesterday I spoke with veteran VC Bill Davidow: "When I look at companies such as Facebook, Zynga etc, I see high valuations but at least these companies have business models with proven revenues.

Over on VentureBeat, Riley McDermind spoke with Phil Black, co-founder of True Ventures VC firm: "We need to worry about a bubble when there are businesses being valued at sky high prices with no underlying fundamentals," he said. At Y Combinator Paul Graham, a veteran investor in early-stage companies, says there is no bubble. "What's happening now is a lot more localized. How to Pitch a VC (aka &quot;Startup Viagra&quot;) Pxl lan (Top 3 LB) AXE Showerpooling. Paris, Désordres Publics, Making OF. Ipad & tablets. Star Wars according to a 3 year old.