HubPages: A Different Kind Of Content Farm - Empowering Writers. Posted by Tom Foremski - February 9, 2011 The second largest privately held web site next to the Huffington Post is San Francisco based HubPages where "Hubbers" publish articles on a wide variety of topics and get paid through Google AdSense. 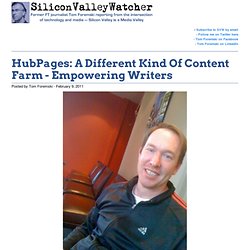 Some of the more popular Hubbers can earn more than a thousand dollars a month and they own their own content -- a different model from Demand Media, which commissions articles from more than 17,000 writers. I recently met with HubPages' CEO Paul Edmondson. Here are some notes from our conversation: AOL Buys Huffington Post for $315 Million in Cash. In a bold and definitive move, AOL is paying $315 million, mostly in cash, to buy the Huffington Post, one of the Web’s most prominent news and opinion sites. 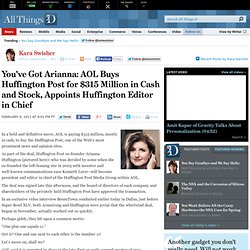 As part of the deal, Huffington Post co-founder Arianna Huffington (pictured here)–who was derided by some when she co-founded the left-leaning site in 2005 with investor and well-known communications exec Kenneth Lerer–will become president and editor in chief of the Huffington Post Media Group within AOL. The deal was signed late this afternoon, and the board of directors of each company and shareholders of the privately held Huffington Post have approved the transaction. AOL and Huffington post – models for big news media in the digital age? « The Equity Kicker.

By now you may well have heard that AOL has acquired Huffington Post for $315m. 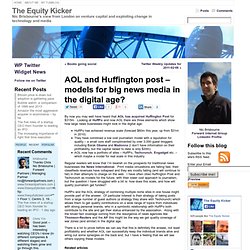 Looking at HuffPo and now AOL there are three elements which show how large news businesses might look in the digital age: HuffPo has achieved revenue scale (forecast $60m this year, up from $31m in 2010) They have combined a low cost journalism model with a reputation for quality – a small core staff complimented by over 3,000 guest bloggers including Barak Obama and Madonna (I don’t have information on their profitability, but the capital raised to date is only $20m) AOL now has a portfolio of sites – HuffPo, Techcrunch, Engadget etc. – which maybe a model for real scale in this industry Regular readers will know that I’m bearish on the prospects for traditional news businesses like News International. The Atlantic Turns a Profit, With an Eye on the Web. Hold the front page: Financial Times on iPad does a cool £1m in ad revenue. Could it be that the iPad and its ilk are the savior of the newspaper industry? 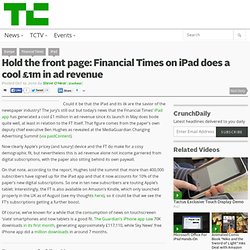 The jury’s still out but today’s news that the Financial Times’ iPad app has generated a cool £1 million in ad revenue since its launch in May does bode quite well, at least in relation to the FT itself. That figure comes from the paper’s own deputy chief executive Ben Hughes as revealed at the MediaGuardian Changing Advertising Summit (via paidContent). Now clearly Apple’s pricey (and luxury) device and the FT do make for a cosy demographic fit, but nevertheless this is ad revenue alone not income garnered from digital subscriptions, with the paper also sitting behind its own paywall. On that note, according to the report, Hughes told the summit that more than 400,000 subscribers have signed up for the iPad app and that it now accounts for 10% of the paper’s new digital subscriptions. Aggregators: the good ones vs. the looters. News aggregators have grown into all shapes and forms. 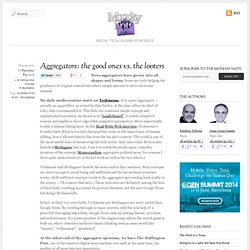 Some are truly helping the producers of original content but others simply amount to mere electronic ransack. The Way I Work: Michael Arrington of TechCrunch. TechCrunch, a San Francisco-based company that publishes the influential blog of the same name, started as a hobby. 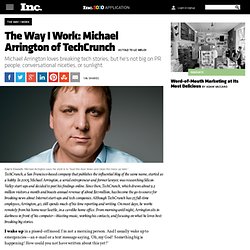 In 2005, Michael Arrington, a serial entrepreneur and former lawyer, was researching Silicon Valley start-ups and decided to post his findings online. Since then, TechCrunch, which draws about 9.2 million visitors a month and boasts annual revenue of about $10 million, has become the go-to source for breaking news about Internet start-ups and tech companies. Although TechCrunch has 25 full-time employees, Arrington, 40, still spends much of his time reporting and writing. On most days, he works remotely from his home near Seattle, in a cavelike home office. From morning until night, Arrington sits in darkness in front of his computer—blasting music, working his contacts, and focusing on what he loves best: breaking big stories.

MediaWatch Monday: Media Wars Over Conference Coverage Hurts Startups. Posted by Tom Foremski - September 20, 2010 I was at the DEMO Fall conference last week in Santa Clara, which is co-organized by the online news publication VentureBeat and IDG. 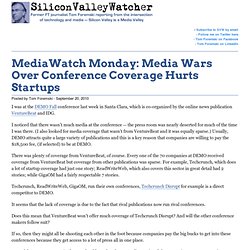 I noticed that there wasn't much media at the conference -- the press room was nearly deserted for much of the time I was there. (I also looked for media coverage that wasn't from VentureBeat and it was equally sparse.) Usually, DEMO attracts quite a large variety of publications and this is a key reason that companies are willing to pay the $18,500 fee, (if selected) to be at DEMO.

Did the Web kill journalism, and will the iPad bring it back? Guest Post: Here's Why Google's Paywall Will Work (And The Times' Will Fail) Posted by Guest Writer - July 28, 2010. 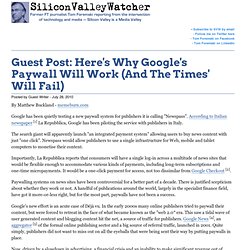 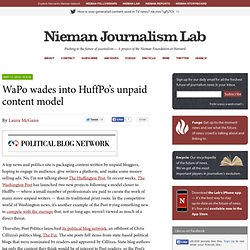 No, I’m not talking about The Huffington Post. In recent weeks, The Washington Post has launched two new projects following a model closer to HuffPo — where a small number of professionals are paid to curate the work of many more unpaid writers — than its traditional print roots. In the competitive world of Washington news, it’s another example of the Post trying something new to compete with the startups that, not so long ago, weren’t viewed as much of a direct threat. Thursday, Post Politics launched its political blog network, an offshoot of Chris Cillizza’s politics blog, The Fix.

The site posts full items from state-based political blogs that were nominated by readers and approved by Cillizza. On Our Third Birthday, Some Thoughts On Digital Media And The Future Of The Newspaper Business. Henry Blodget's Risky Bet on the Future of News. Henry Blodget is a man who will be neither easily riled nor insulted. 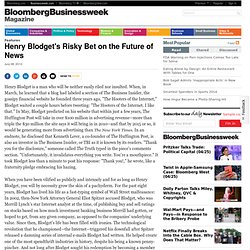 Is Print Media Doomed Worldwide or Just In The US? As I walked in the headquarters of the Jawa Pos—the flagship newspaper of one of South East Asia’s largest print media empires—I was wondering just how screwed my profession is; globally I mean. Is the death of print a world-wide certainty or merely an American reality? After all a lot of “old economy” businesses are thriving in emerging markets thanks to Greenfield advantages and rising middle class economics.

Spoiler alert: I walked out a few hours later not hugely convinced print is the future but willing to believe that in some places the death-blow of digital might be limited to a mere-crippling. Google finally reveals AdSense cut: 68% on content « BuzzMachine. At last, Google is revealing its split on AdSense: 68% to publishers for content ads, 51% for search ads. I had two primary complaints about Google in my otherwise admittedly and obviously wet-kiss book, What Would Google Do? : Google’s policy aiding government censorship in China and its opacity on advertising relationships. New Media Business Models. Every company is a media company. How The Mainstream Media Stole Our News Story Without Credit. On Friday, I broke a tasty story about a woman suing Google, claiming bad directions caused her to get hit by a vehicle. Digital Thinkers. Yahoo Wants HuffPo Badly. Yahoo is clearly positioning itself to become a stronger player in the online content game, as evidenced by its recent acquisition of Associated Content.

But we are hearing that the real prize they want is the Huffington Post. The two companies are currently in negotiations over a deep content partnership, according to sources close to the situation. NSFW: Content Is King! Rest In Peace, Content. “Can Tim Armstrong make AOL king of content by 2010?” – Blog headline. The creator of Google News on how journalism will change in the. I just watched a rather long but fascinating interview with Google News’ creator Krishna Bharat at the IJ-7 “innovation journalism” conference at Stanford University.