Learning from the best

Insiders Tell The Story Of LinkedIn's Stunning Success. Ten Rules for Web Startups. #1: Be NarrowFocus on the smallest possible problem you could solve that would potentially be useful. 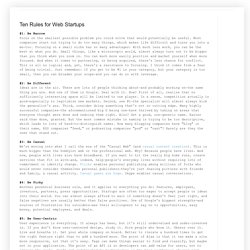 Most companies start out trying to do too many things, which makes life difficult and turns you into a me-too. Focusing on a small niche has so many advantages: With much less work, you can be the best at what you do. Small things, like a microscopic world, almost always turn out to be bigger than you think when you zoom in.

You can much more easily position and market yourself when more focused. And when it comes to partnering, or being acquired, there's less chance for conflict. . #2: Be DifferentIdeas are in the air. . #3: Be CasualWe're moving into what I call the era of the "Casual Web" (and casual content creation) . #4: Be PickyAnother perennial business rule, and it applies to everything you do: features, employees, investors, partners, press opportunities. . #5: Be User-CentricUser experience is everything. . #7: Be GreedyIt's always good to have options.

How A Startup Named Hipster Got 10K Signups In Two Days, Without Revealing What It Does. By now you might be familiar with the startup with the funny name, as its very existence made news outlets as diverse as the Washington Post, Portfolio.com and Hipster Runoff. 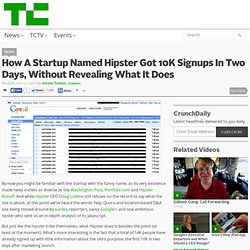 And while Hipster CEO Doug Ludlow still refuses on the record to say what the site is about, at this point we’ve heard the words Yelp, Quora and location-based Q&A site being tossed around by sundry reporters, savvy Googlers and one ambitious tipster who sent us an in-depth analysis of its Javascript. But just like the hipster tribe themselves, what Hipster does is besides the point (at least at the moment). What’s more interesting is the fact that a total of 14K people have already signed up with little information about the site’s purpose, the first 10K in two days after marketing launch. How did Ludlow do it? Drawing directly from Fork.ly‘s viral “launching soon” page, he posted the following link on Hacker News, “Want to be a Hipster? Okay Hipster, now’s your turn to delight. Dropbox – The Power of a “Value Based” Startup.

Drew Houston, CEO/Founder of Dropbox, gave an amazingly forthcoming presentation at the Startup Lessons Learned Conference chronicling his team’s path from idea to their current position as one of today’s hottest startups. 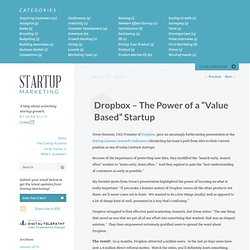 Because of the importance of protecting user data, they modified the “launch early, launch often” mantra to “learn early, learn often.” And they aspired to gain the “best understanding of customers as early as possible.” My favorite quote from Drew’s presentation highlighted the power of focusing on what is really important: “If you make a feature matrix of Dropbox versus all the other products out there, we’ll never come out in front. We wanted to do a few things [really] well as opposed to a lot of things kind of well, presented in a way that’s confusing.” Dropbox struggled to find effective paid marketing channels, but Drew states: “The one thing that saved us was that we put all of our effort into something that worked, that was an elegant solution.” The worst things startups do. What Startups Are Really Like. October 2009 (This essay is derived from a talk at the 2009 Startup School.) 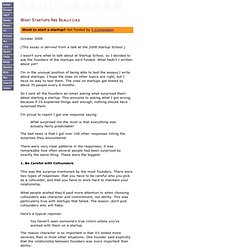 I wasn't sure what to talk about at Startup School, so I decided to ask the founders of the startups we'd funded. What hadn't I written about yet? I'm in the unusual position of being able to test the essays I write about startups. I hope the ones on other topics are right, but I have no way to test them. Dropbox Startup Lessons Learned. The State Of Web Development Ripped Apart In 25 Tweets By One Ma. There are few people who know the ins and outs of the web as well as Joe Hewitt. 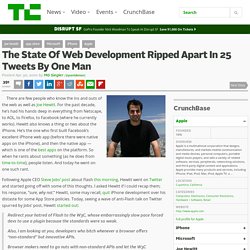 For the past decade, he’s had his hands deep in everything from Netscape, to AOL, to Firefox, to Facebook (where he currently works). Hewitt also knows a thing or two about the iPhone. He’s the one who first built Facebook’s excellent iPhone web app (before there were native apps on the iPhone), and then the native app — which is one of the best apps on the platform.

So when he rants about something (as he does from time-to-time), people listen. And today he went on one such rant. Following Apple CEO Steve Jobs’ post about Flash this morning, Hewitt went on Twitter and started going off with some of this thoughts. So basically, Hewitt’s take is that Flash (and all plug-ins) only exists because the W3C (the governing body for web standards) is too slow to formalize and approve innovative new technologies. 10 years ago we bullied Microsoft into stopping innovation on IE so the W3C could take over.