Google I/O 2010 Day 1: A more powerful web in more places. Google Opens Up the Buzz API. Since you’re probably a little Googled out with the barrage of announcements coming out of I/O Wednesday, we’ll keep this one brief. 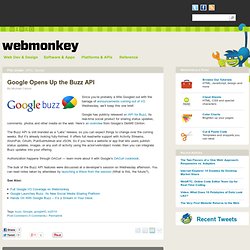 Google has publicly released an API for Buzz, its real-time social product for sharing status updates, comments, photos and other media on the web. Here’s an overview from Google’s DeWitt Clinton. The Buzz API is still branded as a “Labs” release, so you can expect things to change over the coming weeks. But it’s already looking fully-formed. It offers full read/write support with Activity Streams, AtomPub, OAuth, PubSubHubbub and JSON. On Web Video Support, Safari Now Stands Alone. SAN FRANCISCO — When Google announced it would be releasing the VP8 video codec under an open source license, all of the major browser vendors jumped up to support it. 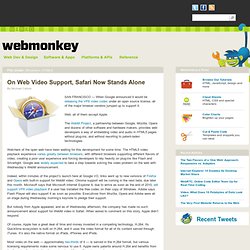 Well, all of them except Apple. The WebM Project, a partnership between Google, Mozilla, Opera and dozens of other software and hardware makers, provides web developers a way of embedding video and audio in HTML5 pages without plug-ins, and without resorting to patent-laden technologies. Watchers of the open web have been waiting for this development for some time. The HTML5 video playback experience varies greatly between browsers, with different browsers supporting different flavors of video, creating a poor user experience and forcing developers to rely heavily on plug-ins like Flash and Silverlight. Google, Typekit Join Up to Improve Web Fonts. Google has announced a new Font API and a collection of free, open source fonts anyone can use in their site designs for free. 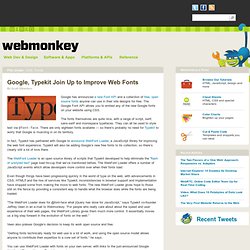 The Google Font API allows you to embed any of the new Google fonts on your website using CSS. The fonts themselves are quite nice, with a range of script, serif, sans-serif and monospace typefaces. They can all be used to style text via @font-face. There are only eighteen fonts available — so there’s probably no need for Typekit to worry that Google is muscling in on its territory. In fact, Typekit has partnered with Google to announce WebFont Loader, a JavaScript library for improving the web font experience. The WebFont Loader is an open source library of scripts that Typekit developed to help eliminate the “flash of unstyled text” page load hiccup that we’ve mentioned before. Adobe Adds HTML5 Creation Tools to Dreamweaver. SAN FRANCISCO — Adobe will begin shipping a package of HTML5 web design tools for Dreamweaver, the company says. 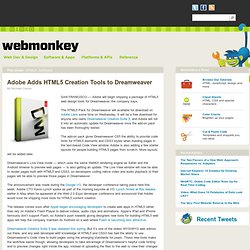 The HTML5 Pack for Dreamweaver will available for download on Adobe Labs some time on Wednesday. It will be a free download for anyone who owns Dreamweaver Creative Suite 5, and Adobe will roll it into an automatic update for Dreamweaver once the add-on pack has been thoroughly tested. The add-on pack gives Dreamweaver CS5 the ability to provide code hints for HTML5 elements and CSS3 styles when building pages in the text-based Code View window. Adobe is also adding a few starter layouts for people building HTML5 pages from scratch. More layouts will be added later. Dreamweaver’s Live View mode — which uses the same WebKit rendering engine as Safari and the Android browser to preview web pages — is also getting an update. Major Browser Vendors Launch WebM Free Open Video Project. SAN FRANCISCO — The web received a shiny new gift Wednesday morning — a truly open and royalty-free video codec for HTML5 web pages. 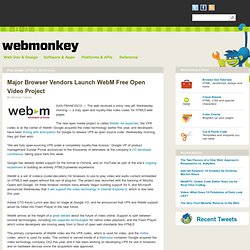 The new open media project is called WebM. As expected, the VP8 codec is at the center of WebM. Google acquired the video technology earlier this year, and developers have been itching with anticipation for Google to release VP8 as open source code. Wednesday morning, they got their wish. “We are fully open-sourcing VP8 under a completely royalty-free license,” Google VP of product management Sundar Pichai announced to the thousands of attendees at the company’s I/O developer conference, taking place here this week. Google Apps To Get Unified Search In The Not-Too-Distant Future. Today during a press discussion at Google I/O, Matthew Glotzbach, Google’s Director of Product, Enterprise, strongly hinted that Google Apps would soon be getting a key new feature: unified search across all of a user’s Google Apps. 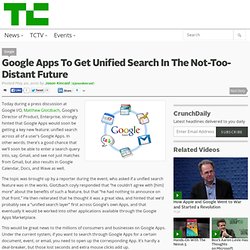 In other words, there’s a good chance that we’ll soon be able to enter a search query into, say, Gmail, and see not just matches from Gmail, but also results in Google Calendar, Docs, and Wave as well. The topic was brought up by a reporter during the event, who asked if a unified search feature was in the works. Sergey Brin: Native Apps And Web Apps Will Converge In The Not-T. Today at Google I/O during the Chrome press session, one question seemed to come up over and over again: why build a new Chrome Web Store when there is already an Android Marketplace? 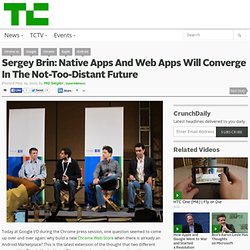 This is the latest extension of the thought that two different areas within Google (Android and Chrome) are increasingly competing with one another as platforms. But Google has a different take. For them, it’s about natural selection for now. And eventually, it will be about a natural convergence. Google VP of Product Sundar Pichai says that by investing in both platforms, the company will be well-positioned no matter what happens in the future. Google co-founder Sergey Brin went further. He notes that during the keynote today, we got a glimpse at how the HTML model is coming along. Brin acknowledges that for now, the market is proving the need for native apps. Google Previews Chrome Web Store — An App Store For The Web (If. Today at the Google I/O conference in San Francisco, Google showed off a preview of a major new product: the Chrome Web Store. 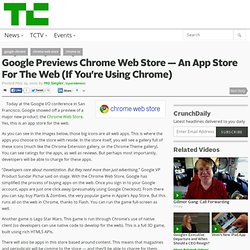 Yes, this is an app store for the web. As you can see in the images below, those big icons are all web apps. This is where the apps you choose in the store with reside. In the store itself, you will see a gallery full of these icons (much like the Chrome Extension gallery, or the Chrome Theme gallery). You can see ratings for the apps, as well as reviews. “Developers care about monetization. Another game is Lego Star Wars. There will also be apps in this store based around content. As an example of pricing, Google showed that MugTug Darkroom (shown below) will be $4.99. But this exciting new store comes with another cost: you have to be using Chrome to use this store. Whoa...Chrome Makes an App Store for the Web. At the Google I/O developer conference today the company is unveiling a number of remarkable new technologies, but one of the most notable is a paradigm shift more than it is tech. 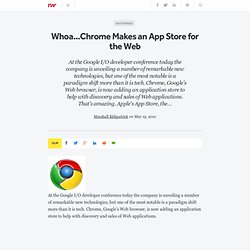 Chrome, Google's Web browser, is now adding an application store to help with discovery and sales of Web applications. That's amazing. Apple's App Store, the seductive jungle of little bundles of functionality that changed the mobile market, has also changed the open Web. As Google said at the event, it can be hard to find good Web applications. Now the Chrome App Store will make that easier, including posting user reviews of apps. It's so crazy that it just might work. There's a lot to think about here. Google says that the App Store will appear in the developers' channel of Chrome soon, and all apps will be built on standard technologies to ensure they can run in any browser.

Below, a blurry screenshot of a user's purchased apps from the live streaming I/O video. Google Challenges Apple’s Music Dominance. Google is taking aim at Apple’s dominance of online music, offering Android users the opportunity to buy music on the web and have it automatically sync to their mobile devices — as well as stream all the music on their home computers to their phones. 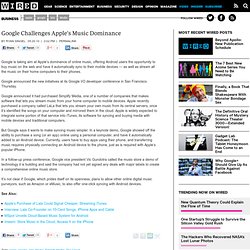 Google announced the new initiatives at its Google I/O developer conference in San Francisco Thursday. Google announced it had purchased Simplify Media, one of a number of companies that makes software that lets you stream music from your home computer to mobile devices. Apple recently purchased a company called LaLa that lets you stream your own music from its central servers, once it’s identified the songs on your computer and mirrored them in the cloud. Apple is widely expected to integrate some portion of that service into iTunes, its software for syncing and buying media with mobile devices and traditional computers. Google Chrome Web Apps Store Offers Lifeline to Media. Google’s Gundotra Goes After Apple: The Video.