Visualizing the importance of retention in Freemium. A freemium product's retention curve is generally accepted to assume the shape of a negative exponential function, as below: A retention curve might take this form if retention in the earliest stages of product use was determined solely by quality, but it is not. 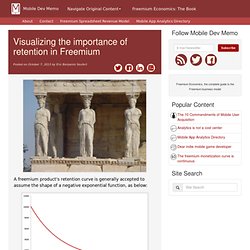 Rather, early retention -- especially Day 1 retention -- is affected by a number of other factors, mostly related to marketing. Marketing channel mix can impact early stage retention substantially. When a product is being marketed across channels that are not optimally descriptive or targeted (such as incentivized mobile installs), Day 1 retention may be reduced.Demographic targeting, when not effectively implemented, can drag Day One retention down by exposing the product to users for whom it is not at all appropriate. Generally, broad, high-volume marketing campaigns are associated with attendant drops in Day 1 retention.

The Freemium Codex - A collection of freemium resources. Freemium, as a business model, is not fairly well defined from an academic perspective -- that is, its application to, and implementing in, software products is guided largely by existing precedent. 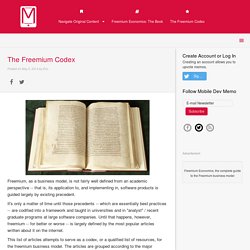 It's only a matter of time until those precedents -- which are essentially best practices -- are codified into a framework and taught in universities and in "analyst" / recent graduate programs at large software companies. Until that happens, however, freemium -- for better or worse -- is largely defined by the most popular articles written about it on the internet. This list of articles attempts to serve as a codex, or a qualified list of resources, for the freemium business model. The articles are grouped according to the major features of the model as defined in Freemium Economics. Low conversion in free-to-play is a feature, not a bug. An article excoriating the supposed plague that is free-to-play made the rounds recently, citing engagement statistics from Swrve's April report in support of an argument asserting that, because average engagement rates for free-to-play games are low, and the percentage of players that pay anything within free-to-play games is very low, consumers clearly don’t enjoy free-to-play games. 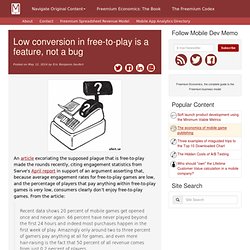 From the article: Recent data shows 20 percent of mobile games get opened once and never again. 66 percent have never played beyond the first 24 hours and indeed most purchases happen in the first week of play. Amazingly only around two to three percent of gamers pay anything at all for games, and even more hair-raising is the fact that 50 percent of all revenue comes from just 0.2 percent of players.This is a statistically insignificant amount of happy gamers and nothing that gives you a basis to make claims about “what people want”.

MBA Mondays: Revenue Models - Subscriptions. When I got into the venture capital business in the mid 80s, software was sold. 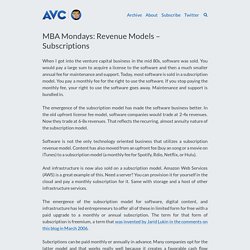 The reality of consumer products I’ve never met an entrepreneur who’s happy with their metrics. 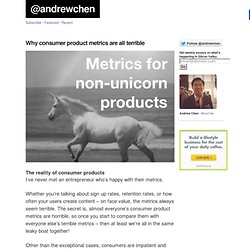 Whether you’re talking about sign up rates, retention rates, or how often your users create content – on face value, the metrics always seem terrible. The secret is, almost everyone’s consumer product metrics are horrible, so once you start to compare them with everyone else’s terrible metrics – then at least we’re all in the same leaky boat together! Other than the exceptional cases, consumers are impatient and disinterested in your product. Even the ones who sign up to try it out, only a small % are willing to stick around to use it more. As we’re discuss later, a typical product might see 90% refuse to sign up to a product.

The purpose of this discussion isn’t to excuse mediocre engagement or retention, but rather, to have an honest discussion of what most companies are seeing in the market. Signup ratesRetention and frequencySocial graph density But these are just the content pages. 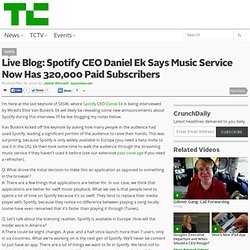 Ek will likely be revealing some new announcements about Spotify during this interview. I’ll be live blogging my notes below. Van Buskirk kicked off the keynote by asking how many people in the audience had used Spotify, leading a significant portion of the audience to raise their hands. This was surprising, because Spotify is only widely available in Europe (you need a beta invite to use it in the US). Ek then took some time to walk the audience through the streaming music service if they haven’t used it before (see our extensive past coverage if you need a refresher).

Q: What drove the initial decision to make this an application as opposed to something in the browser? Q: Let’s talk about the licensing realities. Q: Which platforms/devices are most exciting? Q: Let’s talk about the business side of bundling. Q: How do indy artists get music on Spotify? Q: US Launch? Vimeo has 150,000 paying subscribers — Online Video News.