Facebook: We’ll Serve 1 Billion Likes On The Web In Just 24 Hour. Today at Facebook’s f8 conference in San Francisco, CEO Mark Zuckerberg made what seemed like a bold prediction. 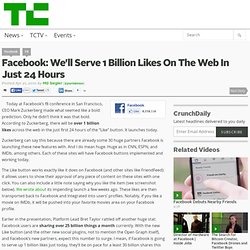 Only he didn’t think it was that bold. According to Zuckerberg, there will be over 1 billion likes across the web in the just first 24 hours of the “Like” button. It launches today. Zuckerberg can say this because there are already some 30 huge partners Facebook is launching these new features with. And I do mean huge. The Like button works exactly like it does on Facebook (and other sites like FriendFeed): it allows users to show their approval of any piece of content on these sites with one click.

Earlier in the presentation, Platform Lead Bret Taylor rattled off another huge stat: Facebook users are sharing over 25 billion things a month currently. Facebook VP Chris Cox On The Company’s Past, Future, And Recipe. Today to close out its f8 developer conference, Facebook VP of Product Chris Cox took the stage to talk about the evolution of Facebook over the last six years, and how the company’s core principles have largely remained the same. 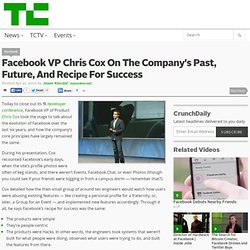 During his presentation, Cox recounted Facebook’s early days, when the site’s profile photos were often of keg stands, and there weren’t Events, Facebook Chat, or even Photos (though you could see if your friends were logging in from a campus dorm — remember that?). Cox detailed how the then-small group of around ten engineers would watch how users were abusing existing features — like creating a personal profile for a fraternity, or, later, a Group for an Event — and implemented new features accordingly. I Think Facebook Just Seized Control Of The Internet. The opening keynote at Facebook’s f8 conference today in San Francisco was short and sweet. 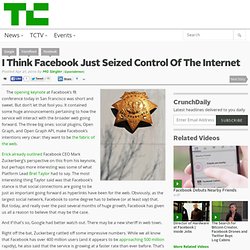 But don’t let that fool you. It contained some huge announcements pertaining to how the service will interact with the broader web going forward. A Look At The Future of Facebook Credits. Zuckerberg: “We Are Building A Web Where The Default Is Social” Today at Facebook’s F8 conference), Mark Zuckerberg laid out his plan to turn the Web into “instantly social experiences.” 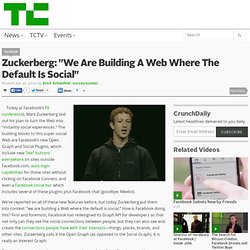 The building blocks to this super-social Web are Facebook’s new Open Graph and Social Plugins, which include new “like” buttons everywhere on sites outside Facebook.com, auto-login capabilities for those sites without clicking on Facebook Connect, and even a Facebook social bar which includes several of these plugins plus Facebook chat (goodbye, Meebo). We’ve reported on all of these new features before, but today Zuckerberg put them into context: “we are building a Web where the default is social.” How is Facebook doing this? First and foremost, Facebook has redesigned its Graph API for developers so that not only can they see the social connections between people, but they can also see and create the connections people have with their interests—things, places, brands, and other sites. Facebook Insights: Taking Web Analytics to the Next Level. Is the New Facebook a Deal With the Devil? Facebook blew people's minds today at its F8 developer conference but one sentiment that keeps coming up is: this is scary. 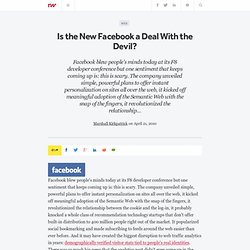 The company unveiled simple, powerful plans to offer instant personalization on sites all over the web, it kicked off meaningful adoption of the Semantic Web with the snap of the fingers, it revolutionized the relationship between the cookie and the log-in, it probably knocked a whole class of recommendation technology startups that don't offer built-in distribution to 400 million people right out of the market. It popularized social bookmarking and made subscribing to feeds around the web easier than ever before. And it may have created the biggest disruption to web traffic analytics in years: demographically verified visitor stats tied to people's real identities. There was so much big news that the analytics part didn't even come up in the keynote.

We won't go into all the details in this post. Docs.com: Facebook and Microsoft Go After Google Docs. During today's F8 keynote, Mark Zuckerberg announced a number of new products and features for Facebook, including a new collaboration with Microsoft. 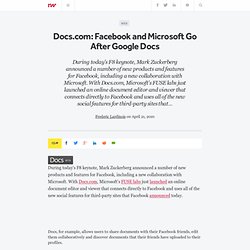 With Docs.com, Microsoft's FUSE labs just launched an online document editor and viewer that connects directly to Facebook and uses all of the new social features for third-party sites that Facebook announced today. Docs, for example, allows users to share documents with their Facebook friends, edit them collaboratively and discover documents that their friends have uploaded to their profiles. Creating Documents in the Cloud and Sharing them With Your Facebook Friends With Docs, you can create new documents right in the web application or upload them from your desktop. Docs gives you the option to share documents privately or you can allow a select group of your Facebook friends to edit the document with you.

Attacking Google. Facebook Tests "Presence", RFID Location at F8 Conference. Just imagine - you walk down the hallway, past your co-workers, past your bosses, past the HR department and on to the company keg. 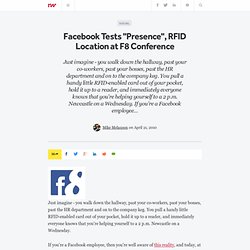 You pull a handy little RFID-enabled card out of your pocket, hold it up to a reader, and immediately everyone knows that you're helping yourself to a 2 p.m. Newcastle on a Wednesday. Facebook: A Billion Likes? Don’t Worry Our Infrastructure Can Ha. Facebook Opens Up to the Web — Is That Good or Bad? Both carried a single, unmistakable message: Facebook wants to own your activity on the Internet. 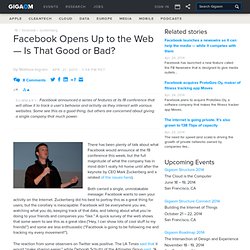 Zuckerberg did his best to portray this as a great thing for users, but the corollary is inescapable: Facebook will be everywhere you are, watching what you do, keeping track of that data, and talking about what you’re doing to your friends and companies you “like.” A quick survey of the web shows that some seem to see this as a great idea (“Hey, I can show lots of cool stuff to my friends!”) And some are less enthusiastic (“Facebook is going to be following me and tracking my every movement!”). The reaction from some observers on Twitter was positive.

The LA Times said that it would “make sharing easier,” while Deborah Schultz of the Altimeter Group said, “A world that is more open and connected — always a good thing (despite some snarky comments); thanks FB for pushing open!!!” Facebook Makes Itself a Central Point of Failure for the Web. Facebook, with its open graph announcements at the f8 conference today, is digging itself deep into the infrastructure of the web. 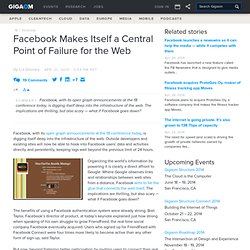 Outside developers and existing sites will now be able to hook into Facebook users’ data and activities directly and persistently, keeping logs well beyond the previous limit of 24 hours. Organizing the world’s information by powering it is clearly a direct affront to Google. Facebook: The Entire Web Will Be Social. Facebook, as expected, launched at its f8 conference in San Francisco today its master plan to make the rest of the web social. 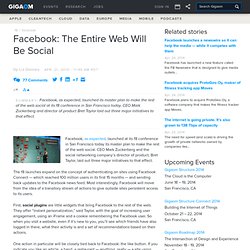 CEO Mark Zuckerberg and the social networking company’s director of product, Bret Taylor, laid out three major initiatives to that effect. The f8 launches expand on the concept of authenticating on sites using Facebook Connect — which reached 100 million users in its first 15 months — and sending back updates to the Facebook news feed. Most interestingly, Facebook will move from the idea of a transitory stream of actions to give outside sites persistent access to its users. Facebook F8 Press Conference. Pandora's CTO excited about new Facebook features. FACEBOOK BOMBSHELL – How DID EVERYONE miss this! #facebook #f8. At 24.17 minutes into the presentation. I let out a “You’ve GOT to be F#$#$#$#$ kidding me” So I rewound it.

No – they’re not kidding. My little marketers heart leapt with joy. First, A question. “When was the last time you updated your Facebook Profile” NO NO NO NO – not status updates, or photos or Farmville. Your ACTUAL profile – you know your favourite movies, books, likes, hobbies etc Yes – you’ve done this – you’ve probably forgotten about it, I mean with all those fields to tend in Farmville.

You see, most people did this when they joined up and have not updated it since. I know I haven’t in ages – (I haven’t added in Justin Beiber for example in my favourite artists section… KIDDING!) Robert Scoble: Is this how the web looks... Is this how the web looks to Facebook? on Flickr - Photo Sharing. Facebook Closing In On 500 Million Visitors A Month (ComScore)

Facebook is closing in on the 500 million monthly unique visitors mark. The social network saw 484 million unique visitors worldwide in March, 2010, according to comScore’s latest estimate. That number is up 64 percent from a year ago, and up 22 million from just February, 2010. In other words, it grew by about the size of Twitter.com’s entire U.S. audience in a single month. Facebook: What They Announced At F8. It’s been a busy day at F8, Facebook’s third developer conference, and there is much to talk about. To stem the confusion, we have compiled a list of the top, most important announcements that have come so far. To be sure, this was a developer event. Facebook has thrown open the gates to most of the roadblocks that were annoying developers. Happy developers are busy developers, and Facebook knows it. The four areas that we are going to focus on are the Open Graph protocol, new Social Plugins, Search, and OAuth 2.0.