Throw Everything You Know About Ads Out The Window (pics inside) « Ads.pof.com Blog. 4/5/2012 Edit: Follow-up to this case study can be found here: I personally found this hilarious, tested these 2 ads for the sake of curiosity 15k impressions each: - Nice picture of actual in-game content - Green call to action button w/ “free”, “free online racing” - Trust symbol (EA = reputable, Need For Speed = huge reputable franchise) - Some shit ad I made in 5 mins in Microsoft Paint. 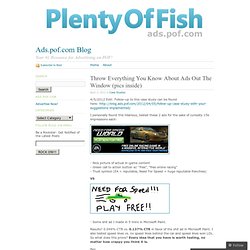 Results? 0.049% CTR vs. 0.137% CTR in favor of the shit ad in Microsoft Paint. Ben Edit: So looks like many people are asking for conversion %’s. The New York Times - Breaking News, World News & Multimedia. How to find and interview potential customers - LaunchBit. Published by Elizabeth Yin By Elizabeth Last night, I gave a talk at the monthly Lean Startup Circle meetup in Boston. 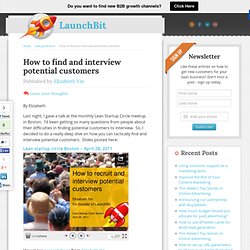 Chris dixon's blog / SEO is no longer a viable marketing strategy for startups. Many of the today’s most successful informational sites such as Yelp, Wikipedia and TripAdvisor relied heavily on SEO for their initial growth. 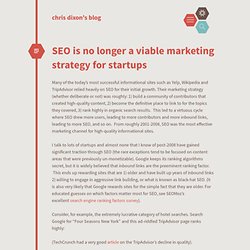 Their marketing strategy (whether deliberate or not) was roughly: 1) build a community of contributors that created high-quality content, 2) become the definitive place to link to for the topics they covered, 3) rank highly in organic search results. This led to a virtuous cycle where SEO drew more users, leading to more contributors and more inbound links, leading to more SEO, and so on. From roughly 2001-2008, SEO was the most effective marketing channel for high-quality informational sites. I talk to lots of startups and almost none that I know of post-2008 have gained significant traction through SEO (the rare exceptions tend to be focused on content areas that were previously un-monetizable).

Google keeps its ranking algorithms secret, but it is widely believed that inbound links are the preeminent ranking factor. Blog post: How to announce a new iteration? Facebook Pages We’re excited to share with you a new feature that will allow Seesmic Desktop to access and manage your Facebook Pages. 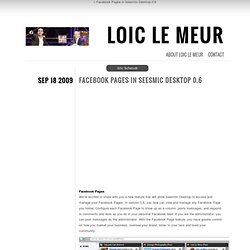 In version 0.6, you now can view and manage any Facebook Page you follow. Configure each Facebook Page to show up as a column, posts messages, and respond to comments and likes as you do in your personal Facebook feed. If you are the administrator, you can post messages as the administrator. With the Facebook Page feature, you have greater control on how you market your business, oversee your brand, listen to your fans and build your community. 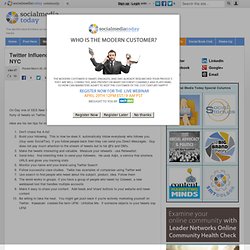 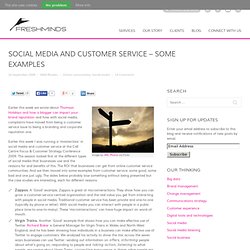 Earlier this week I was running a ‘masterclass’ in social media and customer service at the Call Centre Focus & Customer Strategy Conference 2009. The session looked first at the different types of social media that businesses use and the reasons for and benefits of this. The ROI that businesses can get from online customer service communities. And we then moved into some examples from customer service: some good, some bad and one just ugly. The slides below probably lose something without being presented but the case studies are interesting, each for different reasons. Zappos. Case Study: Using an LOI to get customer feedba. How much work should you do on a new product before involving customers? 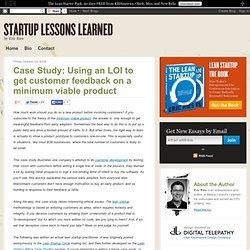 If you subscribe to the theory of the minimum viable product, the answer is: only enough to get meaningful feedback from early adopters. Sometimes the best way to do this is to put up a public beta and drive a limited amount of traffic to it. But other times, the right way to learn is actually to show a product prototype to customers one-on-one.

This is especially useful in situations, like most B2B businesses, where the total number of customers is likely to be small. This case study illustrates one company’s attempt to do customer development by testing their vision with customers before writing a single line of code. Along the way, this case study raises interesting ethical issues. The following was written an actual lean startup practitioner. How to lose an argument online. Have an argument. 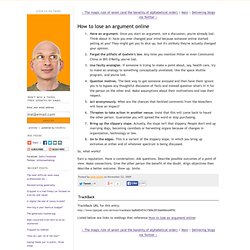 Once you start an argument, not a discussion, you've already lost. Think about it: have you ever changed your mind because someone online started yelling at you? They might get you to shut up, but it's unlikely they've actually changed your opinion.Forget the pitfalls of Godwin's law. Any time you mention Hitler or even Communist China or Bill O'Reilly, you've lost.Use faulty analogies. If someone is trying to make a point about, say, health care, try to make an analogy to something conceptually unrelated, like the space shuttle program, and you've lost.Question motives. So, what works?