Borderlands / La Frontera: The New Mestiza: Amazon.co.uk: Gloria Anzaldua, Norma Cantu, Aida Hurtado: 9781879960855: Books. Borderlands/ La Frontera: the new Mestiza by Gloria Anzaldua is a wonderful piece of literature that refreshes and revitalizes the image of both Chicana/os and lesbians in a refreshing manner that exalts the power and possibilities immanent in both these marginalized perspectives. 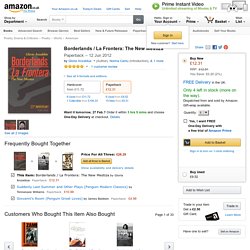 To reader who are skeptical of the legitimacy behind these positions beware, the immediacy of her prose and poetry may just convert you. But, regardless of ones knowledge of either contemporary issues in the more academic realm of queer theory and Chicano studies. As I Walked Out One Midsummer Morning. As I Walked Out One Midsummer Morning (1969) is a memoir by Laurie Lee, a British poet. 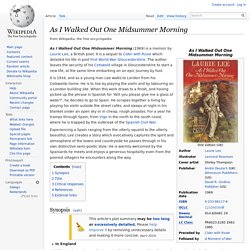 It is a sequel to Cider with Rosie which detailed his life in post First World War Gloucestershire. The author leaves the security of his Cotswold village in Gloucestershire to start a new life, at the same time embarking on an epic journey by foot. It is 1934, and as a young man Lee walks to London from his Cotswolds home.

He is to live by playing the violin and by labouring on a London building site. When this work draws to a finish, and having picked up the phrase in Spanish for 'Will you please give me a glass of water? ' Experiencing a Spain ranging from the utterly squalid to the utterly beautiful, Lee creates a story which evocatively captures the spirit and atmosphere of the towns and countryside he passes through in his own distinctive semi-poetic style. Synopsis[edit] Winter Pollen: Occasional Prose: Amazon.co.uk: Ted Hughes: 9780571174263: Books. Meter and Meaning: An Introduction to Rhythm in Poetry: Amazon.co.uk: Thomas Carper, Derek Attridge: 9780415311755: Books. 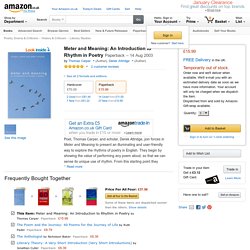 Flip to back Flip to front Listen Playing... Paused You're listening to a sample of the Audible audio edition. Learn more See this image <div> Poet, Thomas Carper, and scholar, Derek Attridge, join forces in <EM>Meter and Meaning</EM> to present an illuminating and user-friendly way to explore the rhythms of poetry in English. Frequently Bought Together No Kindle device required. Apple Android Windows Phone To get the free app, enter your e-mail address or mobile phone number. or Inside This Book (Learn More) Browse and search another edition of this book. What Other Items Do Customers Buy After Viewing This Item? Look for similar items by category. The Anger of Achilles, Mênis in Greek Epic. "Menis opens for consideration an immense range of significant poetic possibilities, not the least of which is that of an ethical sense for the term. 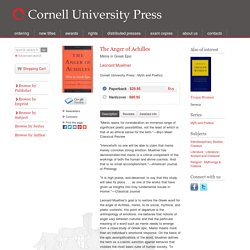 "—Bryn Mawr Classical Review "Henceforth no one will be able to claim that menis merely connotes strong emotion. Muellner has demonstrated that menis is a critical component of the workings of both the human and divine cosmos. And that is no small accomplishment. "—American Journal of Philology "It is high praise, and deserved, to say that this study will take its place . . . as one of the works that have given us insights into truly fundamental issues in Homer.

" Leonard Muellner's goal is to restore the Greek word for the anger of Achilles, menis, to its social, mythical, and poetic contexts. Gulliver's Travels. Travels into Several Remote Nations of the World. 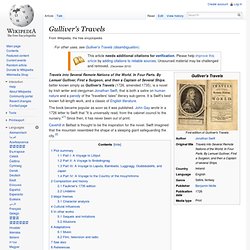 In Four Parts. By Lemuel Gulliver, First a Surgeon, and then a Captain of Several Ships, better known simply as Gulliver's Travels (1726, amended 1735), is a novel by Irish writer and clergyman Jonathan Swift, that is both a satire on human nature and a parody of the "travellers' tales" literary sub-genre. It is Swift's best known full-length work, and a classic of English literature. The book became popular as soon as it was published. John Gay wrote in a 1726 letter to Swift that "It is universally read, from the cabinet council to the nursery. 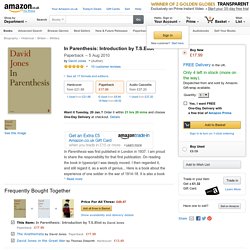 Flip to back Flip to front Listen Playing... Paused You're listening to a sample of the Audible audio edition. Learn more See this image Want it Tuesday, 20 Jan.? <div><p><i>In Parenthesis</i> was first published in London in 1937. Frequently Bought Together No Kindle device required. Apple Android Windows Phone To get the free app, enter your e-mail address or mobile phone number. or What Other Items Do Customers Buy After Viewing This Item? Look for similar items by category. The Swerve: How the World Became Modern. The Swerve: How the World Became Modern is a book by Stephen Greenblatt and winner of the 2012 Pulitzer Prize for General Non-Fiction and 2011 National Book Award for Nonfiction.[1][2] Greenblatt tells the story of how Poggio Bracciolini, a 15th-century papal emissary and obsessive book hunter, saved the last copy of the Roman poet Lucretius's On the Nature of Things from near-terminal neglect in a German monastery, thus reintroducing important ideas that sparked the modern age.[3][4][5] The title and the subtitle of the book are explained in the author's preface. 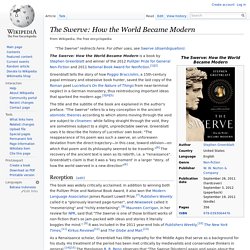 "The Swerve" refers to a key conception in the ancient atomistic theories according to which atoms moving through the void are subject to clinamen: while falling straight through the void, they are sometimes subject to a slight, unpredictable swerve. Reception[edit] The book was widely critically acclaimed. As a Renaissance scholar, Greenblatt has little sympathy for the Middle Ages that serve as a background for his study. Teaching a Stone to Talk: Expeditions and Encounters: Amazon.co.uk: Annie Dillard: 9780060915414: Books. Flip to back Flip to front Listen Playing... 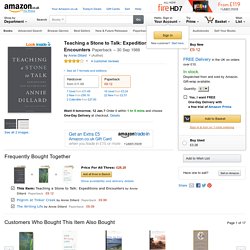