Greenhouse greenland. Arctic Agriculture. Farming in the Arctic: It Can Be Done. On a misty fjord in Greenland, just miles from the planet’s second largest body of ice, Sten Pedersen is growing strawberries. 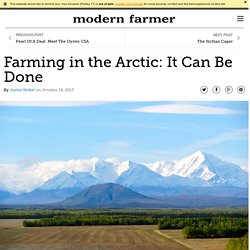 Yellowknife, a Canadian city 320 miles below the Arctic Circle, hosted a farmers market this summer. And a greenhouse in Iqaluit, the capital of the vast Canadian Inuit territory of Nunavut, is producing spinach, kale, peppers and tomatoes. The frozen tundra of the Arctic is experiencing something of an agriculture boom. The reasons are many. For one, the climate is changing: Arctic temperatures over the past 100 years have increased at almost twice the global average. The diet of many indigenous Arctic peoples is also changing: Traditionally meat-eaters, groups like the Inuit are now consuming more grains and vegetables. Non-local-vegetables and other foods are shipped long distances and cost a fortune, $28 for a head of cabbage in some instances.

“People here in the circumpolar north are aware that we could very easily be cut off,” says Dr. Dr. Barley in Alaska. Agriculture in the Arctic. Lead Author: Glenn P. 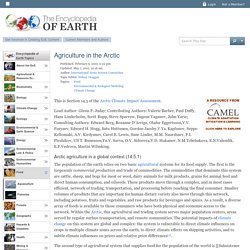 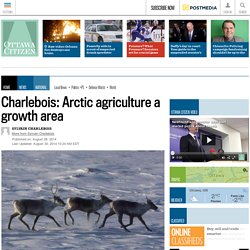 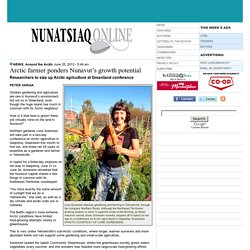 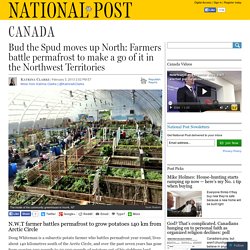 Although his current crop is still only half of the typical yield in Alberta or Ontario, it is impressive by the standards of Norman Wells, N.W.T., where the average high temperature crosses 13C only three months a year. It took Mr. Whiteman years of trial and error attempts at working with compost, fertilizer and vegetable matter, to bring his “dead soil” to life. UArctic - Northern Food Security. Arctic Agriculture. Feds pledge $4M for Arctic agriculture to offset import food bill. FORT SMITH, N.W.T. — The prime minister has promised $4 million for training students on how to grow more food in the Arctic and to attract private investment for innovative greenhouse farming research. 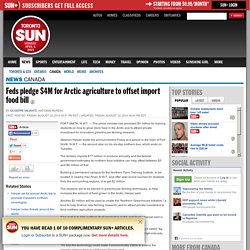 Stephen Harper made his announcement Friday at a school in the town of Fort Smith, N.W.T. — the second stop on his six-day northern tour, which ends on Tuesday. The territory imports $17 million in produce annually and the federal government estimates its northern food initiative can help offset between $5 and $6 million of that. Building a permanent campus for the Northern Farm Training Institute, to be located in nearby Hay River, N.W.T., and offer year-round courses for students from the surrounding regions, is to get $2 million. Harper North trip to highlight agriculture, Arctic sovereignty. Prime Minister Stephen Harper leaves for his ninth annual trip north today — a visit that has become a bit of a summer ritual. 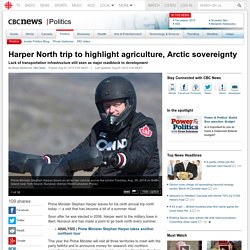 Soon after he was elected in 2006, Harper went to the military base in Alert, Nunavut and has made a point to go back north every summer. ANALYSIS | Prime Minister Stephen Harper takes another northern tour This year the Prime Minister will visit all three territories to meet with the party faithful and to announce money for research into northern agriculture and telecommunications and to wave the Canadian flag from the deck of naval ship that is travelling in the High Arctic. He'll also highlight what his office calls "new partnerships and technologies that are a part of the 2014 Search for Franklin Expedition.

" The north is changing from being out-of-sight and out-of-mind and into a region that is playing a growing role in the country's sovereignty and economic development. Roads, airports vital for growth, say business leaders Only 10 paved airport runways. Arctic Harvest: Global Warming a Boon for Greenland's Farmers. Ferdinand Egede would be a perfectly normal farmer if it weren't for that loud cracking noise. 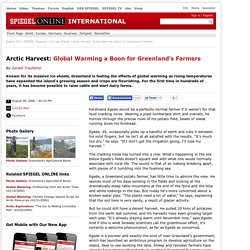 Wearing a plaid lumberjack shirt and overalls, he hurries through the precise rows of his potato field, beads of sweat running down his forehead. Greenhouse Iqaluit. Canada's most northern society-driven above-the-tree-line greenhouse! [Guest Post] Iqaluit Community Greenhouse. Greenhouse gardening catches on in Iqaluit. They might now notice a particularly bright green spot concentrated into 90 square metres within the capital of Nunavut – the new Iqaluit Community Greenhouse. 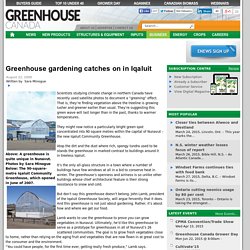 Atop the dirt and the dust where rich, spongy tundra used to be stands the greenhouse in marked contrast to buildings around it in treeless Iqaluit. It’s the only all-glass structure in a town where a number of buildings have few windows at all in a bid to conserve heat in winter. The greenhouse’s openness and airiness is so unlike other buildings whose chief architectural feature is their strong resistance to snow and cold.