A Multimedia History of World War One. WW1 Timeline - A detailed history of the Great War 1914-1918. The following WW1 timeline pages lay out the principal events of the Great War day by day with a year on each page. 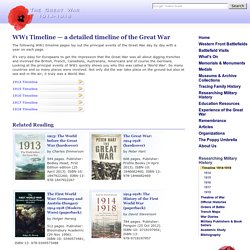 It's very easy for Europeans to get the impression that the Great War was all about digging trenches and involved the British, French, Canadians, Australians, Americans and of course the Germans. Looking at the principal events of WW1 quickly shows you why this was called a 'World War'. So many countries and so many places were involved. Not only did the war take place on the ground but also at sea and in the air; it truly was a World War. 1914 Timeline1915 Timeline1916 Timeline1917 Timeline1918 Timeline. WORLD WAR I. World War I (1914–1918) was the first war in history to be fought by many different nations around the world. 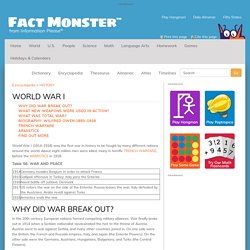 About eight million men were killed, many in horrific TRENCH WARFARE, before the ARMISTICE in 1918. Table 56. WAR AND PEACE. World War 1 Aircraft. 10 Ways Children Took Part In The First World War. Outbreak and Causes of WW1: 25 facts Kids *** Outbreak of WW1 for kids: America remains NeutralAt the outbreak of WW1 President Woodrow Wilson adopted a neutral and impartial stance in an effort to keep the United States from being drawn into a foreign war. 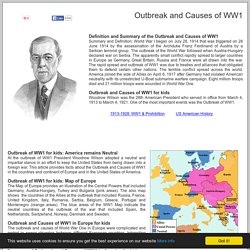 This article provides facts about the Outbreak and Causes of WW1 in the countries and continent of Europe and in the United States of America. Outbreak of WW1 for kids: Map of EuropeThe Map of Europe provides an illustration of the Central Powers that included Germany, Austria-Hungary, Turkey and Bulgaria (pink areas). The also map shows the countries of the Allies at the outbreak that included Russia, France, United Kingdom, Italy, Rumania, Serbia, Belgium, Greece, Portugal and Montenegro (orange areas). National Geographic Kids. 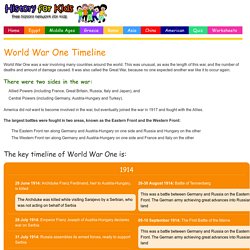 This was unusual, as was the length of this war, and the number of deaths and amount of damage caused. It was also called the Great War, because no one expected another war like it to occur again. Causes of World War one - World War 1 - History for Kids. Causes of World War I The relationship had been tense between many European countries in the years before. 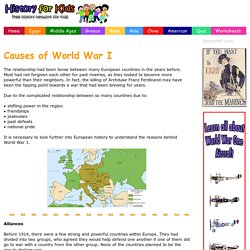 Most had not forgiven each other for past rivalries, as they looked to become more powerful than their neighbors. In fact, the killing of Archduke Franz Ferdinand may have been the tipping point towards a war that had been brewing for years. Life at Home During World War One. World War I for Kids: Timeline. History >> World War I1914 June 28 - Archduke Franz Ferdinand, prince to the Austria-Hungary throne, is assassinated in Sarajevo by a Serbian named Gavrilo Princip. 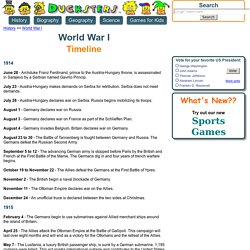 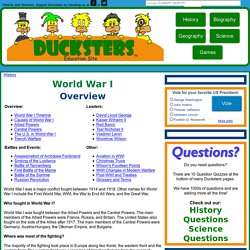 Other names for World War I include the First World War, WWI, the War to End All Wars, and the Great War. Who fought in World War I? World War I was fought between the Allied Powers and the Central Powers. The main members of the Allied Powers were France, Russia, and Britain. The United States also fought on the side of the Allies after 1917. US History: The Great Depression for Kids. History >> US History 1900 to Present Migrant MotherPhoto by Dorothea Lange Farm Security Administration The Great Depression was a time of great economic crisis during the 1930s. 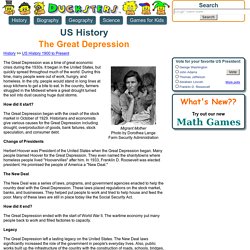 It began in the United States, but quickly spread throughout much of the world. During this time, many people were out of work, hungry, and homeless. In the city, people would stand in long lines at soup kitchens to get a bite to eat. 40 Facts about the Great Depression: US History for Kids *** Depression & WWII (1929-1945) 50 Interesting Great Depression Facts. References 1 Bennett, Drake. 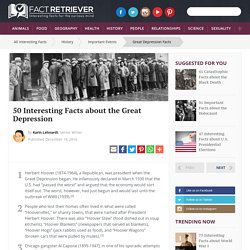