It was not very simple trying to find sources for this project because some were one-sided and that's not very effective you need to hear and know about both sides. This is a very strong topic but I feel like the majority feel the same way that people should have the right to Freedom of Speech. Freedom of Expression in China: A Privilege, Not a Right. Chinese authorities, recognizing in recent years that limited freedom of expression enables the government to better monitor potentially problematic social issues (referred to as "舆论监督") have begun to tolerate criticism, but only from certain categories of people, a kind of "free-speech elite," and only then in government-controlled forums. 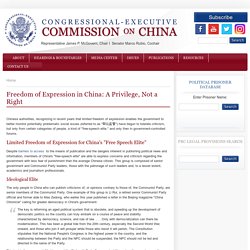 Limited Freedom of Expression for China's "Free Speech Elite" Despite barriers to access to the means of publication and the dangers inherent in publishing political news and information, members of China's "free-speech elite" are able to express concerns and criticism regarding the government with less fear of punishment than the average Chinese citizen. This group is composed of senior government and Communist Party leaders, those with the patronage of such leaders and, to a lesser extent, academics and journalism professionals. Ideological Elite This text is from a speech Mr. Intellectual and Professional Elite Linguistic Elite Financial Elite.

Definition, Amendments, Examples, & Facts. - The Washington Post. Why Is Freedom of Speech an Important Right? When, if Ever, Can It Be Limited? Before answering this question, read the full text of the amendment. 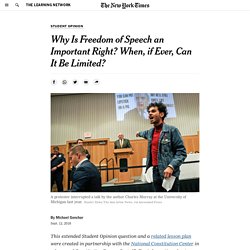 What does it say about speech? Congress shall make no law respecting an establishment of religion, or prohibiting the free exercise thereof; or abridging the freedom of speech, or of the press; or the right of the people peaceably to assemble, and to petition the Government for a redress of grievances. Next, read these excerpts from three recent articles about free speech cases that might affect your life: In a September 2017 article, “High Schools Threaten to Punish Students Who Kneel During Anthem,” Christine Hauser writes: In a June 2018 article, “Colleges Grapple With Where — or Whether — to Draw the Line on Free Speech,” Alina Tugend writes: In another June 2018 article, “Supreme Court Strikes Down Law Barring Political Apparel at Polling Places,” Adam Liptak writes: What is freedom of speech? Freedom of Speech. Freedom of speech—the right to express opinions without government restraint—is a democratic ideal that dates back to ancient Greece. 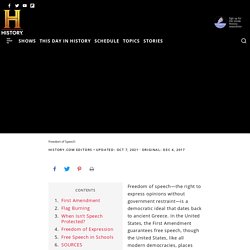 In the United States, the First Amendment guarantees free speech, though the United States, like all modern democracies, places limits on this freedom. In a series of landmark cases, the U.S. Supreme Court over the years has helped to define what types of speech are—and aren’t—protected under U.S. law. The ancient Greeks pioneered free speech as a democratic principle. What Does Free Speech Mean? Main content Among other cherished values, the First Amendment protects freedom of speech. 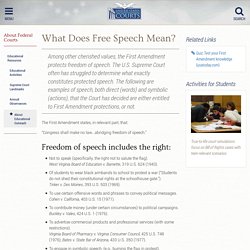 The U.S. Supreme Court often has struggled to determine what exactly constitutes protected speech. The Ongoing Challenge to Define Free Speech. Freedom of speech, Supreme Court Justice Benjamin Cardozo declared more than 80 years ago, “is the matrix, the indispensable condition of nearly every other form of freedom.” 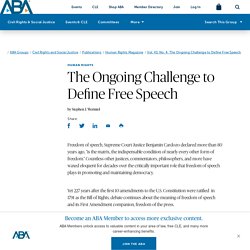 Countless other justices, commentators, philosophers, and more have waxed eloquent for decades over the critically important role that freedom of speech plays in promoting and maintaining democracy. Yet 227 years after the first 10 amendments to the U.S. Press Freedom in Iran. Freedom of expression and freedom of the press are not adequately protected in Iranian law. 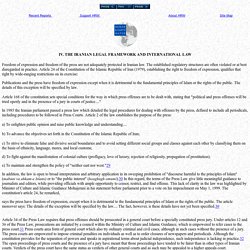 The established regulatory structures are often violated or at best disregarded in practice. Article 24 of the Constitution of the Islamic Republic of Iran (1979), establishing the right to freedom of expression, qualifies that right by wide-ranging restrictions on its exercise: Publications and the press have freedom of expression except when it is detrimental to the fundamental principles of Islam or the rights of the public.

The details of this exception will be specified by law. Article 168 of the constitution sets special conditions for the way in which press offenses are to be dealt with, stating that "political and press offenses will be tried openly and in the presence of a jury in courts of justice.... " a) To enlighten public opinion and raise public knowledge and understanding.... Free speech debate: new guidelines to protect university speakers' 'lawful free speech' Does Freedom of Speech Exist - Emerging Media - Loyola University Maryland. When the first Amendment was put into place freedom of speech was born, we were all given the right to express any opinion without censorship or restraint. 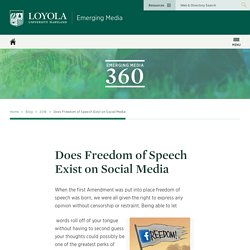 Being able to let words roll off of your tongue without having to second guess your thoughts could possibly be one of the greatest perks of living in America. Although we are free to say what we want, we are not allowed to express any opinion that offends, threatens, or insults groups, based on race, color, religion, national orientation, or disability (hate speech). Does freedom of speech apply online if we are given limitations? Is there a way to compromise? Social media has become a one stop shop for many; keeping up with current events, celebrity gossip, a journal, a tool to grow business and most importantly a sanctuary where the first amendment could be utilized as a shield protecting them from the consequences of their words.