Les Shadoks. The Shadoks were bird-like in appearance (in the tradition[citation needed] of cartoon birds they had beaks with teeth), were characterised by ruthlessness and stupidity and inhabited a two dimensional planet. 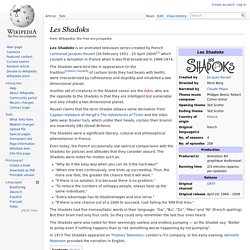 Another set of creatures in the Shadok canon are the Gibis, who are the opposite to the Shadoks in that they are intelligent but vulnerable and also inhabit a two-dimensional planet. Rouxel claims that the term Shadok obtains some derivation from Captain Haddock of Hergé's The Adventures of Tintin and the Gibis (who wear Bowler hats, which unlike their heads, contain their brains) are essentially GBs (Great Britons). The Shadoks were a significant literary, cultural and philosophical phenomenon in France. Les Shadoks. Les proverbes les plus connus.