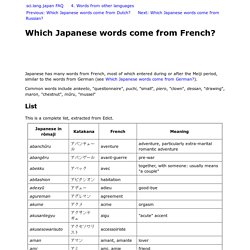 Common words include ankeeto, "questionnaire", puchi, "small", piero, "clown", dessan, "drawing", maron, "chestnut", mūru, "mussel" This is a complete list, extracted from Edict. This material is used under the licence of the Electronic Dictionary Research and Development Group of Monash University, Australia. The Most Common Loan Words in Japanese. History of Loan Words The Japanese language has borrowed many words from foreign countries, firstly from China as early as the Nara Period (710-794). 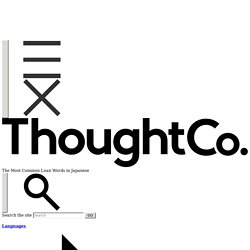 Gairaigo (外来語) is Japanese word for "loan word" or "borrowed word". Many Chinese words were mixed into Japanese to the extent that they are no longer considered "loan words". Most Chinese loan words are written in kanji and carry the Chinese reading (on-reading). Around the 17th century, the Japanese language began to borrow from many western languages. The Japanese use English words to express concepts for which they have no equivalents. Loan words are generally written in katakana, except the ones of Chinese origin. Therefore, they end up quite different from the original pronunciation.

Many loan words are often abbreviated in ways they wouldn't get abbreviated in their original language. Examples of Loan Words Multiple words are also shortened, often to four syllables. A loan word can be generative. Japanese Body Parts Vocabulary and Idioms. You know what’s more embarrassing than falling on your butt in front of everyone in Japan? 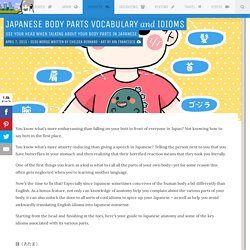 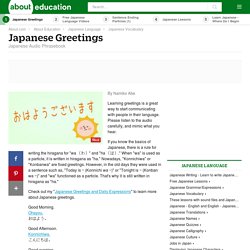 Please listen to the audio carefully, and mimic what you hear. If you know the basics of Japanese, there is a rule for writing the hiragana for "wa （わ）" and "ha （は）. " When "wa" is used as a particle, it is written in hiragana as "ha. " Amazon. 16c Le Japonais En Manga Lecon3. Minna no nihongo i c3bcbersetzungen grammatikalische erklc3a4rungen englisch. "Cours de japonais ! par Julien Fontanier" How to Type Japanese. 40 Survival Japanese Phrases for Basic, Everyday Situations. Are you fluent in your native language? 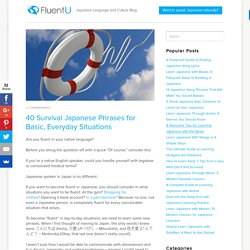 Before you shrug the question off with a quick “Of course,” consider this: If you’re a native English speaker, could you handle yourself with legalese or convoluted medical terms? Japanese spoken in Japan is no different. If you want to become fluent in Japanese, you should consider in what situations you want to be fluent: At the gym? Shopping for clothes? To become “fluent” in day-to-day situations, we need to learn some new phrases. I wasn’t sure how I would be able to communicate with storeowners and bus drivers, passersby and waiters/waitresses – anyone I might need to interact with on a regular day. I’d like to offer some of the words and phrases needed for anyone to become on-the-street fluent in Japan. Tossing out a few “survival Japanese” words and phrases properly pronounced in the correct intonation can do wonders for communication, over poorly strung together sentences that just happen to use the right vocabulary. Greetings and Hellos 1. 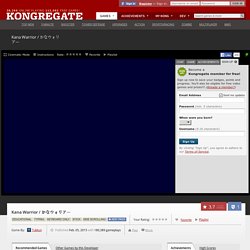 I have listened to your feedbacks and have made various minor improvements to Kana Warrior! First off, if you are already good at Hiragana before playing this game, you can prove your skills in Free Play Mode and if you get at least 1,500,000 points (on any play mode and difficulty setting of choice), you will be able to skip straight to Stage 26 of Adventure Mode and learn Katakana right away! A few players have claimed that they had difficulty beating boss stages.

After checking and playtesting the boss stages carefully, I have decided to slightly reduce the speed of missiles on these stages to make them more playable! For the “All” input mode, you can now use “cya” for ちゃ, “cyu” for ちゅ and “cyo” for ちょ! Kana Warrior has recently won 2nd place in the weekly Kongregate game contest!