“A ground-breaking theory suggests people with autism-spectrum disorders such as Asperger’s do not lack empathy – rather, they feel others’ emotions too intensely to cope.” 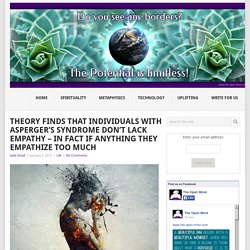 “People with Asperger’s syndrome, a high functioning form of autism, are often stereotyped as distant loners or robotic geeks. But what if what looks like coldness to the outside world is a response to being overwhelmed by emotion – an excess of empathy, not a lack of it? Syndrome d’Asperger, idées reçues sur l’absence d’empathie & la violence. 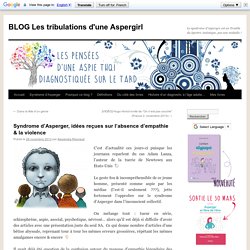 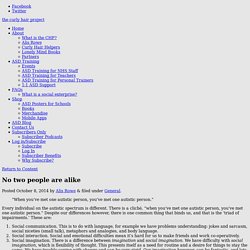 Every individual on the autistic spectrum is different. There is a cliché, “when you’ve met one autistic person, you’ve met one autistic person.” Despite our differences however, there is one common thing that binds us, and that is the ‘triad of impairments.’ These are: Social communication. Now here is where it gets confusing! We all have these three impairments: I Have Nonverbal Autism. Here’s What I Want You to Know. My 12-year-old son, Philip, has nonverbal autism but can communicate with others by typing. 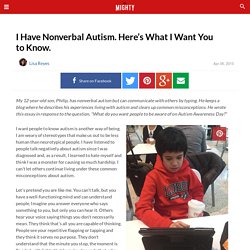 He keeps a blog where he describes his experiences living with autism and clears up common misconceptions. He wrote this essay in response to the question, “What do you want people to be aware of on Autism Awareness Day?” Syndrome d'Asperger – le webdoc. Call Me Aspie: The first part of a thousand-page manual. Autistic and Queer: Coming Out on the Spectrum - AfterEllen. You’ve probably given some thought to where you fall on the sexuality spectrum, but what about the neurological spectrum? 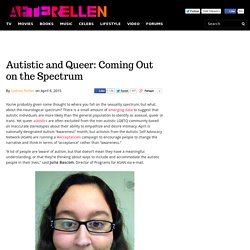 There is a small amount of emerging data to suggest that autistic individuals are more likely than the general population to identify as asexual, queer or trans. Yet queer autistics are often excluded from the non-autistic LGBTQ community based on inaccurate stereotypes about their ability to empathize and desire intimacy. April is nationally designated Autism “Awareness” month, but activists from the Autistic Self Advocacy Network (ASAN) are running a #AcceptanceIs campaign to encourage people to change the narrative and think in terms of “acceptance” rather than “awareness.” “A lot of people are ‘aware’ of autism, but that doesn’t mean they have a meaningful understanding, or that they’re thinking about ways to include and accommodate the autistic people in their lives,” said Julia Bascom, Director of Programs for ASAN via e-mail. 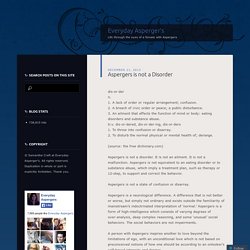 A lack of order or regular arrangement; confusion. 2. A breach of civic order or peace; a public disturbance. 3. An ailment that affects the function of mind or body: eating disorders and substance abuse. tr.v. dis·or·dered, dis·or·der·ing, dis·or·ders 1. To throw into confusion or disarray. 2. Autism Information Library: "Help! I Seem to be Getting More Autistic!" Last updated 13 May 2005 What's this about? 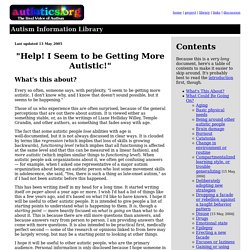 Every so often, someone says, with perplexity, "I seem to be getting more autistic. I don't know why, and I know that doesn't sound possible, but it seems to be happening. " Those of us who experience this are often surprised, because of the general perceptions that are out there about autism. It is viewed either as something stable, or, as in the writings of Liane Holliday Willey, Temple Grandin, and other authors, as something that fades away with age. 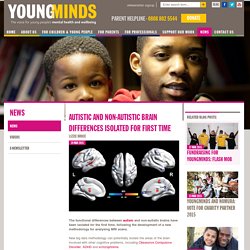 New big data methodology can potentially isolate the areas of the brain involved with other cognitive problems, including Obsessive Compulsive Disorder, ADHD and schizophrenia. Developed by researchers at the University of Warwick, the methodology, called Brain-Wide Association Analysis (BWAS), is the first capable of creating panoramic views of the whole brain and provides scientists with an accurate 3D model to study.

The researchers used BWAS to identify regions of the brain that may make a major contribution to the symptoms of autism. Autism-linked DNA deletion may derail brain development — Hot hubs: Researchers have mapped the binding partners of proteins encoded by the 16p11.2 region (red). 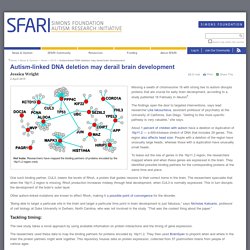 Missing a swath of chromosome 16 with strong ties to autism disrupts proteins that are crucial for early brain development, according to a study published 18 February in Neuron1. The findings open the door to targeted interventions, says lead researcher Lilia Iakoucheva, assistant professor of psychiatry at the University of California, San Diego. “Getting to this more specific pathway is very valuable,” she says. About 1 percent of children with autism have a deletion or duplication of 16p11.2 — a 600-kilobase stretch of DNA that includes 29 genes. This region also affects head size: People with a deletion of the region have unusually large heads, whereas those with a duplication have unusually small heads. Daniel Tammet: Different ways of knowing. Temple Grandin: The world needs all kinds of minds. HP ou Asperger ? Différence surdoué/asperger - Témoignages d'Aspergers. 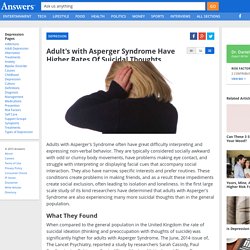 The June, 2014 issue of, The Lancet Psychiatry, reported a study by researchers Sarah Cassidy, Paul Bradley, Janine Robinson, Carrie Allison, Meghan McHugh, and Simon Baron-Cohen. They looked at 374 individuals who had been diagnosed by the Cambridge Lifetime Asperger Syndrome Service (CLASS) clinic in Cambridge, UK between 2004 and 2013. Sixty-six percent (66%) of those with Asperger's contemplated suicide compare to seventeen percent (17%) in the general population. The ideation was also higher for adults with Asperger's than in patients with psychosis (59%.) Differences between Social Anxiety and Asperger's Syndrome.

Note: Although this is not a major area of misdiagnosis today, we receive one or two e-mails a week concerning this subject. Social anxiety and Asperger's disorder are very different in nature and should not be confused. Social anxiety disorder is markedly different than Asperger's Disorder in that Asperger's is a pervasive developmental disorder (also called a milder version of autism) and that people with social anxiety disorder do not display the patterns of behavior expected in definitions A and B. Asperger's Disorder is "a milder variant" of Autistic Disorder. Both Asperger's Disorder and Autistic Disorder are in fact subgroups of a larger diagnostic category. This larger category is called either Autistic Spectrum Disorders or Pervasive Developmental Disorders" according to Dr. Spoons and Splines: the Laws of Thermodynamic Autistic Motion. Pencils, plus vignette added with GIMP (Full credit goes to Luna Lindsey for the inspiration behind this title.)

By Peter Vermeulen, PhDAutism Asperger’s Digest | November/December 2011 What makes social interaction so difficult for people with autism spectrum disorders (ASD)? Traditionally, we have attributed it to both brain physiology (different “wiring” of the brain) and social skill/social understanding challenges, often referred to as impaired perspective taking or “theory of mind” (ToM). We use the term “mind blind” with this population and assume it is this mind blindness that makes it difficult for individuals to relate to others. However, recent research on the social abilities of people with ASD is suggesting that mind blindness is but one piece of the intriguing puzzle about how individuals with ASD think and process the social world around them.

The idea that people with ASD lack social skills and social cognition is based on years-old studies involving younger subjects with autism who also had lower cognitive abilities. 300: Aspergers: The Stuff That Ain’t Working. 1. Exposure Therapy: For years and years I thought if I just socialized more, if I just connected more, and tried harder to be like everyone else, my endurance level for social gatherings would improve and my anxiety levels would decrease.

I believed that through repeated exposure that things would get better. These Are The TV Characters Getting Asperger's Wrong, From Someone Who Has It. When I was first diagnosed with Asperger's syndrome at the age of 14, Asperger's was barely on the public radar. One of my earliest experiences discussing the condition with others was having them make vulgar puns about the name. To say the least, the last 15 years have seen a remarkable change in public awareness. 19 Secrets Autistic People Will Never Tell You. Autism 'caused by genetic make-up' 04 March 2015. Help4aspergers.com - List of Asperger Traits. I Have Asperger's and I Read Your Comments Too - Empathize This. I'm Laughing At This Autistic Girl Because Her Jokes Are Funny, And I'm Learning Things Too. Théorie empathisation-systémisation. Un article de Wikipédia, l'encyclopédie libre.