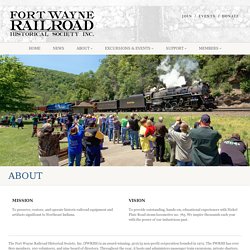 To provide outstanding, hands-on, educational experiences with Nickel Plate Road steam locomotive no. 765. We inspire thousands each year with the power of our industrious past. The Fort Wayne Railroad Historical Society, Inc. (FWRHS) is an award-winning, 501(c)3 non-profit corporation founded in 1972. The FWRHS has over 800 members, 100 volunteers, and nine board of directors. Through the operation of one of the last operating mainline steam locomotives in the world, members of the society are proud caretakers of history that inspires the senses and quickens the pulse. Bill Otter, President Member since 2005, former Society secretary and vice president. 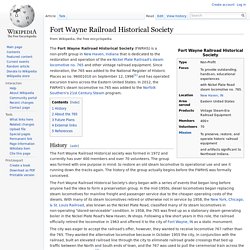 Since restoration, the 765 was added to the National Register of Historic Places as no. 96001010 on September 12, 1996[1] and has operated excursion trains across the Eastern United States. In 2012, the FWRHS's steam locomotive no.765 was added to the Norfolk Southern's 21st Century Steam program. History[edit] 2-8-4 "Berkshire" Type Locomotives. The development of the 2-8-4 wheel arrangement for steam locomotives was a result of an effort by the Lima Locomotive Works to improve on the speed and horse power of the USRA Mikado (2-8-2) locomotive, which was designed by the United States Railroad Administration during World War I. 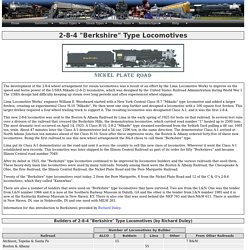 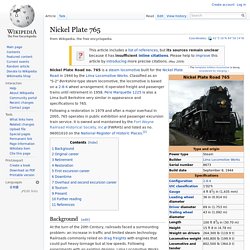 Classified as an "S-2" Berkshire-type steam locomotive, the locomotive is based on a 2-8-4 wheel arrangement. It operated freight and passenger trains until retirement in 1958. Pere Marquette 1225 is also a Lima built Berkshire very similar in appearance and specifications to 765. Following a restoration in 1979 and after a major overhaul in 2005, 765 operates in public exhibition and passenger excursion train service. The 21st Century Steam Program. The 21st Century Steam Program was launched by Norfolk Southern in 2011 to feature historic steam power once more on its system. 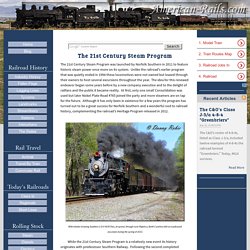 Unlike the railroad's earlier program that was quietly ended in 1994 these locomotives were not owned but leased through their owners to host several excursions throughout the year. The idea for this renewed endeavor began some years before by a new company executive and to the delight of railfans and the public it became reality. At first, only one small Consolidation was used but later Nickel Plate Road #765 joined the party and more steamers are on tap for the future. Although it has only been in existence for a few years the program has turned out to be a great success for Norfolk Southern and a wonderful nod to railroad history, complementing the railroad's Heritage Program released in 2012. Norfolk Southern announces 2014 schedule of 21st Century Steam excursions. A new season of “21st Century Steam” train excursions has launched, with Norfolk Southern Corporation and partners Tennessee Valley Railroad Museum and Fort Wayne Railroad Historical Society scheduling 18 excursions in seven states from April through July. 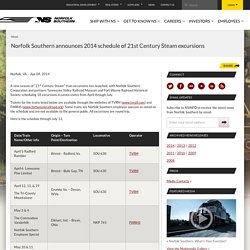 Tickets for the trains listed below are available through the websites of TVRM (www.tvrail.com) and FWRHS (www.fortwaynerailroad.org). Some trains are Norfolk Southern employee specials as noted on the schedule and are not available to the general public. All excursions are round trip. Here is the schedule through July 13.