The Cave. Ultimate Destiny recommends structured water products from Ultimate Water, Inc. Water The Great Mystery (pt.1of6) The Economics of the Coming Spaceship Earth. Click here We are now in the middle of a long process of transition in the nature of the image which man has of himself and his environment. 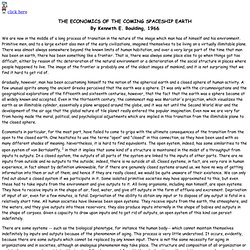 Primitive men, and to a large extent also men of the early civilizations, imagined themselves to be living on a virtually illimitable plane. There was almost always somewhere beyond the known limits of human habitation, and over a very large part of the time that man has been on earth, there has been something like a frontier. That is, there was always some place else to go when things got too difficult, either by reason of thc deterioration of the natural environment or a deterioration of the social structure in places where people happened to live. The image of the frontier is probably one of the oldest images of mankind, and it is not surprising that we find it hard to get rid of. Gradually, however, man has been accustoming himself to the notion of the spherical earth and a closed sphere of human activity. 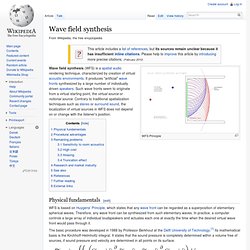 It produces "artificial" wave fronts synthesized by a large number of individually driven speakers. Such wave fronts seem to originate from a virtual starting point, the virtual source or notional source. Contrary to traditional spatialization techniques such as stereo or surround sound, the localization of virtual sources in WFS does not depend on or change with the listener's position.

Physical fundamentals[edit] WFS is based on Huygens' Principle, which states that any wave front can be regarded as a superposition of elementary spherical waves. The basic procedure was developed in 1988 by Professor Berkhout at the Delft University of Technology.[1] Its mathematical basis is the Kirchhoff-Helmholtz integral. The Shaking of the Foundations. Paul Tillich is generally considered one of the century's outstanding and influential thinkers. 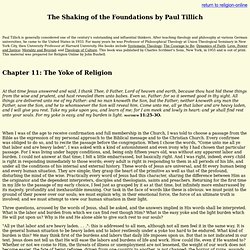 After teaching theology and philosophy at various German universities, he came to the United States in 1933. For many years he was Professor of Philosophical Theology at Union Theological Seminary in New York City, then University Professor at Harvard University. His books include Systematic Theology; The Courage to Be; Dynamics of Faith; Love, Power and Justice; Morality and Beyond; and Theology of Culture.

This book was published by Charles Scribner's Sons, New York, in 1955 and is out of print. This material was prepared for Religion Online by John Bushell. At that time Jesus answered and said, I thank Thee, 0 Father, Lord of heaven and earth, because thou hast hid these things from the wise and prudent, and hast revealed them unto babes. Three questions, aroused by the words of Jesus, shall be asked, and the answers implied in His words shall be interpreted. How does this concern us? 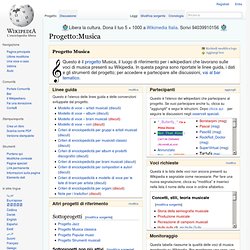 The Cave. 20 Primary Universal Laws. Metatron - Enchanted Rock - Austin Texas. Earth-Keeper Chronicles October 2009 - Issue # 36 " It should not be surprising to understand that Atlanteans occupied certain areas of Texas, for its lands were along the land bridge that connected Poseida to the Yucatan. 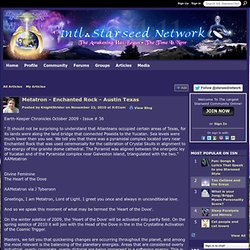 Sea levels were much lower then you see. We tell you that there was a pyramidal complex located very near Enchanted Rock that was used ceremonially for the calibration of Crystal Skulls in alignment to the energy of the granite dome cathedral. Galactic-Handbook-and-Synchronized-Meditations.pdf (application/pdf Object)