OCEAN of TRUTH. Remember the Reef. Department of the Environment and Energy. Humpback whale Copyright: Fiona and David Harvey Find out about marine species conservation in Australia. 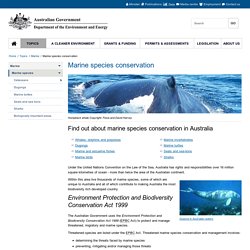 Two guys from Australia invented a trash bin for the ocean. Pools have filters so why not the ocean? 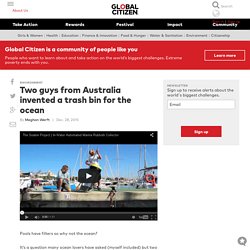 It’s a question many ocean lovers have asked (myself included) but two Australians pondered this and took it further by inventing a filter for harbors around the world. Andrew Turton and Pete Ceglinski, two avid surfers, quit their jobs to create a “seabin” that collects trash, oil, fuel and detergents. The fact that the “seabin” collects oil and detergents succeeds in eliminating all the things the world doesn’t want in the sea and which are extremely hard to filter out once in the ocean. 10 Endangered Ocean Species and Marine Animals. Diving & Marine Conservation in Cambodia. Placement location: Koh Sdach Role: To conduct marine wildlife surveys, collect data, and participate in community activities, such as workshops and waste management plans. 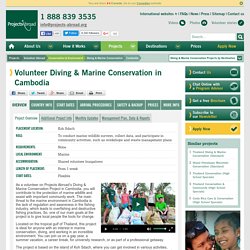 Volunteer Internship in Marine Conservation and Research. Protecting Cambodia’s island paradise?, Post Weekend, Phnom Penh Post. In the waters around the Koh Rong archipelago, the first attempt at government-mandated marine conservation in the Kingdom is underway – it is designed to curb illegal fishing and bad tourism practices by engaging local commmunities. 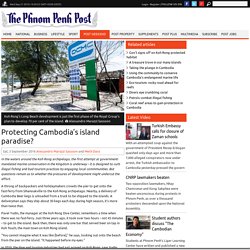 But questions remain as to whether the pressures of development might undercut the effort. A throng of backpackers and holidaymakers crowds the pier to get onto the fast-ferry from Sihanoukville to the Koh Rong archipelago. Nearby, a delivery of Cambodia Beer kegs is unloaded from a truck to be shipped to the islands. A deliveryman says they ship about 30 kegs each day; during high season, it’s more than twice that. 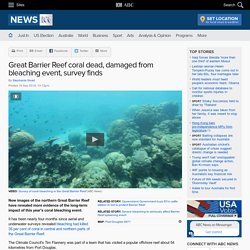 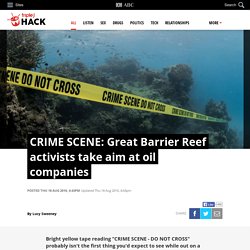 But that's exactly what you would've encountered if you'd trekked out to the Great Barrier Reef last Sunday. Activists from climate change group 350.org staged a protest on the ocean floor, bringing props and signs to make their point. They took aim at multinational oil and gas companies including Exxon Mobil for producing fossil fuels that contribute to global warming. One sign read: "Exxon killed the reef #ExxonKnew.

" Another targeted Australian energy provider AGL. One sign took aim at Australian energy company AGL. But are they really to blame? Dr Charlie Veron is a marine scientist who specialises in corals and reefs. "Fossil fuels are by far the biggest contributor to carbon dioxide and it's carbon dioxide that's causing global warming, and it's global warming that's causing coral bleaching," he said. Bleaching of the Great Barrier Reef and the impact of Coal Seam Gas - Hack - triple j. Marine conservation efforts just took a major step forward. Ocean conservation efforts took a significant step forward on Friday when a measure to protect 30 percent of the world's oceans by 2030 passed during a major meeting in Hawaii. 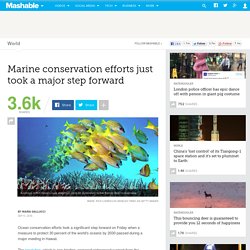 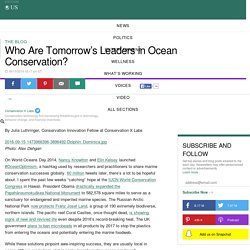 I spent the past few weeks “catching” hope at the IUCN World Conservation Congress in Hawaii. President Obama drastically expanded the Papahānaumokuākea National Monument to 582,578 square miles to serve as a sanctuary for endangered and imperiled marine species. $5.3B Pledged for Marine Conservation at US Summit. A 90-nation conference devoted to the world's oceans ended Friday with $5.3 billion in pledges for marine conservation, which U.S. 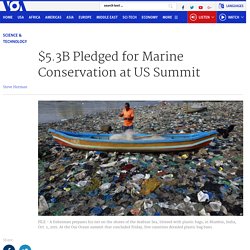 Secretary of State John Kerry said proves "we are making progress. " Forty significant new or expanded marine protected areas were created at the Our Ocean summit, including President Barack Obama's announcement of the first U.S. marine reserve in the Atlantic Ocean — an area totaling 13,000 square kilometers and known for its underwater mountains and canyons off the coast of New England. Commercial fishing, oil exploration and other activities are limited in such areas to protect ecosystems. FILE - Fishermen pull in a net full of anchovies from the Pacific Ocean, Nov. 22, 2012. 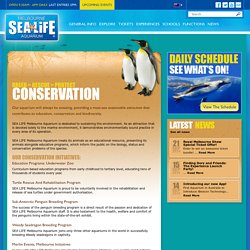 As an attraction that is devoted solely to the marine environment, it demonstrates environmentally sound practice in every area of its operation. SEA LIFE Melbourne Aquarium treats its animals as an educational resource, presenting its animals alongside educative programs, which inform the public on the biology, status and conservation problems of the species. Reduce, reuse, recycle (Department of Environment and Heritage Protection) According to the Australian Bureau of Statistics, every Australian contributes around two tonnes of waste each year - a mixture of household garbage and industrial waste created by things we buy or use. It's becoming more difficult and expensive to find new refuse tips for waste.

Waste disposal is a major issue for the government and the community. By minimising waste ( ) by avoiding and reducing waste, and re-using and recycling, we can cut waste by up to 50 percent-and even more if we compost ( ). Reducing waste also reduces litter ( ). Remember, everything dropped can find its way to beaches, roads, waterways, bush land and parks through the storm water system. If each person changes the way they think and act, the production of waste can be reduced. Do the right thing, put it in the bin Sunshine Coast. Why We Defend Oceans - Sea Shepherd Conservation Society. Project Ocean. The Global Goals Australia Campaign » Goal 14: Life Below Water. Agenda 21 - Chapter 17. CONFERENCE ON ENVIRONMENT AND DEVELOPMENT (Rio de Janeiro, 3-14 June 1992) (Rio de Janeiro, 3-14 June 1992) Chapter 17 17.1. Leo DiCaprio Pledges 7 Million for Oceans. Australian Marine Conservation Society.

Transcript LEIGH SALES, PRESENTER: Exclusive footage of the Great Barrier Reef shows what could be the most severe and extensive coral bleaching on record. A leading coral researcher has just returned from a four-day aerial survey of reefs off Australia's far north coast, and of the 520 reefs his team flew over, all but four were damaged. Welcome to the United Nations. Oceans - United Nations Sustainable Development. 10 Things You Can Do to Save the Ocean. 1. Mind Your Carbon Footprint and Reduce Energy Consumption. Cambodia Ranked Low on Environmental Health - The Cambodia Daily. Cambodia ranked 110 on a list of 133 countries graded on environmental factors affecting health such as drinking water, sanitation and air quality, according to research conducted by Columbia and Yale universities in the US.