Bullying Statistics - National Bullying Prevention Center. Effects of Bullying Students who experience bullying are at increased risk for poor school adjustment, sleep difficulties, anxiety, and depression (Center for Disease Control, 2017). Students who are both targets of bullying and engage in bullying behavior are at greater risk for both mental health and behavior problems than students who only bully or are only bullied (Center for Disease Control, 2017). Bullied students indicate that bullying has a negative effect on how they feel about themselves (19%), their relationships with friends and family and on their school work (14%), and physical health (9%) (National Center for Educational Statistics, 2016).

Students who experience bullying are twice as likely as non-bullied peers to experience negative health effects such as headaches and stomachaches (Gini & Pozzoli, 2013). Mental Health By the Numbers. States with stricter gun control and higher mental health expenditure have fewer school shootings, study finds. Getty States that have stricter laws regarding background checks for gun ownership and spend more money on mental health care and K-12 education have fewer school shootings, according to a new study published in the journal Injury Prevention. 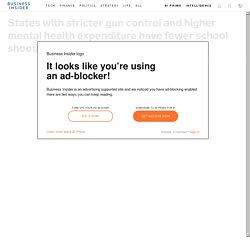 The study, which featured researchers from Boston University, Columbia University, and the University of Texas, examined factors that could contribute to the recent spike in school shootings across the United States. The US had 44 school shootings from 1966-2008, an average of one per year, according to the study. Why Do Shootings Occur? Students say revenge is clearly the major reason for school shootings. 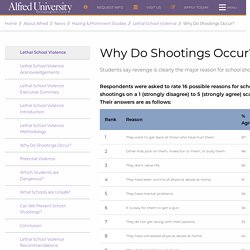 For all groups of students, getting back at those who hurt them; having other kids pick on them, make fun or them or bully them; not valuing life; and being a victim of abuse were consistently among the top five reasons, regardless of what variables were used to analyze the data. Consistently ranked at the bottom among the reasons were being bored; being afraid for their own safety; and being encouraged by others to shoot. ELLIOT RODGER MANIFESTO: MY TWISTED WORLD. What Is the Relationship Between Gun Ownership and Mental Health? In the weeks following the school shooting at Marjory Stoneman Douglas High School in Parkland, Florida, this year, something remarkable happened. 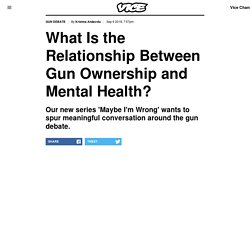 Florida lawmakers delivered a bill to Governor Rick Scott that raised the age of firearm purchase to 21, facilitated arming educators , and increased funding for mental health services. What Is the Relationship Between Gun Ownership and Mental Health? Mental illness and gun laws: What you may not know about the complexities. Every time the country is shaken by a tragic mass shooting and the loss of innocent lives, the same debates are repeated. 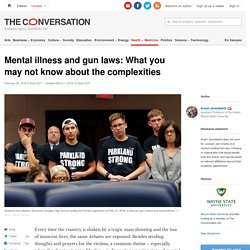 Besides sending thoughts and prayers for the victims, a common theme – especially when the shooter is not a Muslim – is discussing warning signs of mental illness, and its role in the actions of the murderer. In a Feb. 28, 2018 meeting at the White House, in addition to suggesting stricter gun laws, the President said he thought due process for mentally ill people was not as important as making sure that they do not have guns. “I don’t want mentally ill people to be having guns. Take the guns first, go through due process second,” Trump said. In the past, mental illness has been scapegoated to deflect public outrage about access to assault rifles that can kill tens of people in a matter of minutes. 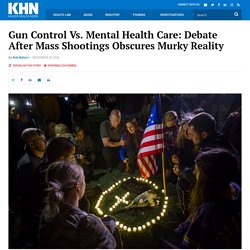 “He was a very sick puppy.” Similarly, after a school shooting in Parkland, Fla., that killed 17 students and staff members in February, Trump tweeted that there were “so many signs that the shooter was mentally disturbed.” Public health and mental health experts counter that blaming the violence on the mentally ill is unfair and inaccurate, pointing instead to lax gun laws. “Most violence is not committed by people who are mentally ill,” said Dr. Renée Binder, a professor of psychiatry at the University of California-San Francisco and a past president of the American Psychiatric Association. Post-shooting debates typically are painted in black and white — but research suggests that the truth is less clear-cut. Dr. 3 Common Traits of School Shooters. Dissecting the distinctive profile of school shooters: 'There's always a trail of what they're about to do'

Mental Illness, Mass Shootings, and the Politics of American Firearms. What characteristics are common among school shooters? The U.S. 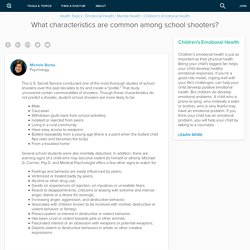 Secret Service conducted one of the most thorough studies of school shooters over the past decades to try and create a "profile. " That study uncovered certain commonalities of shooters. Though these characteristics do not predict a shooter, student school shooters are more likely to be: Male Caucasian Withdrawn (pulls back from school activities) Isolated or rejected from peers Living in a rural community Have easy access to weapons Bullied repeatedly from a young age (there is a point when the bullied child flips roles and becomes the bully) From a troubled homeSeveral school students were also mentally disturbed. In addition, there are warning signs of a child who may become violent (to himself or others). Michael G.

What characteristics do school shooters share? Researcher suggests schools should address adolescent masculinity issues to help prevent rampage shootings. Boys involved in school shootings often struggle to live up to what they perceive as their school's ideals surrounding masculinity. 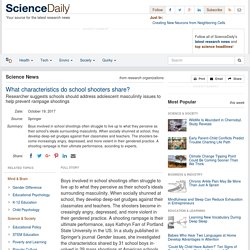 When socially shunned at school, they develop deep-set grudges against their classmates and teachers. The shooters become increasingly angry, depressed, and more violent in their gendered practice. A shooting rampage is their ultimate performance, says Kathryn Farr of Portland State University in the US. In a study published in Springer's journal Gender Issues, she investigated the characteristics shared by 31 school boys involved in 29 mass shootings at American schools between 1995 and 2015. Pieds Du Tireur Comme Douilles Pleuvent Sur Cahiers Scolaires – Photos et plus d'images de Lieu du crime. Mass Shooters Are All Different. Except for One Thing: Most Are Men. Short on supplies, South Sudan rebels fight on.

Before the South Sudanese rebels attacked the town of Kaya, they handed out supplies - a ragged strip of red cloth to identify themselves to each other as friendly forces, a packet of biscuits, and two precious magazines of ammunition per fighter. But government forces counter-attacked, killing several rebels and an American journalist. The rebels ran out of ammunition after 40 minutes and had to retreat back to their base in the bush. "We lack funds and support. The guns we have, the ammunition we have, we take from the enemy," General Matata Frank Elikana, the rebel governor for Yei River State, told Reuters during the long march through rain-soaked elephant grass to the front line.

Oil-rich South Sudan became the world's youngest nation when it won independence from neighbouring Sudan in 2011 following decades of conflict.