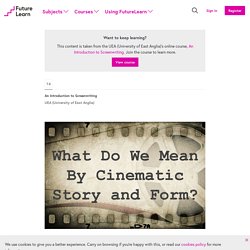 Anyone who’s been to the pictures will have a perfectly good notion of how screen stories operate. For example, most of us are pretty clear that we like particular movie genres: we might like RomComs and hate SciFi, or vice versa. And we know that movies from these genres produce a certain response in us: Comedies, make us laugh; Horror movies will scare us, and so on. So we may not think about it, but we see most movies with a pretty good idea of what to expect from the story. But other, more general, aspects of the movies are so ingrained in us that we may remain unaware of them.

And we unconsciously know that other aspects of the movies will usually happen, but not always. It’s the screenwriter’s job to craft a story that responds to this mix of familiar conventions and audience expectations – and find a way to make it feel fresh and original. Basic characteristics of screen story Developing stories. Untitled. Telling a compelling story through short film formats requires meticulous attention to detail. 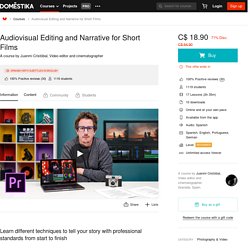 A well-constructed narrative is key, and it goes beyond the script and set. Throughout his career as a video editor and director of photography, Juanmi Cristóbal has learned that color, rhythm, shot length, and many more aspects of video editing greatly contribute to the narrative of a short film. In this course, Juanmi teaches you how to edit a short film, sharing his experience and knowledge with you, to enhance your editing through visual narration techniques. In his previous courses, he focused on software that is widely used in professional editing, namely, Introduction to DaVinci Resolve for Color Correction, to master color editing with professional technique, and Introduction to Adobe Premiere Pro, where he teaches the most used software for editing films, TV, and web content, from start to finish. If you like telling stories with videos, this is the course for you. 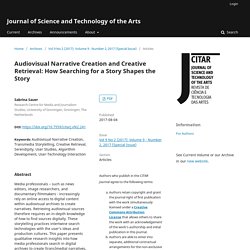 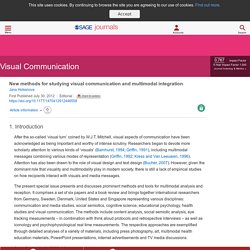 Introduction After the so-called ‘visual turn’ coined by W.J.T. Mitchell, visual aspects of communication have been acknowledged as being important and worthy of intense scrutiny. Researchers began to devote more scholarly attention to various kinds of ‘visuals’ (Barnhurst, 1994; Griffin, 1991), including multimodal messages combining various modes of representation (Griffin, 1992; Kress and Van Leeuwen, 1996).

Attention has also been drawn to the role of visual design and text design (Bucher, 2007). The present special issue presents and discusses prominent methods and tools for multimodal analysis and reception. According to Jewitt (2009: 14): School of Media and Communication. Our research The Visual Media and Communication research group is interested in the dominant role of the visual in communication and media culture, in raising questions about the role of the visual in everyday life. 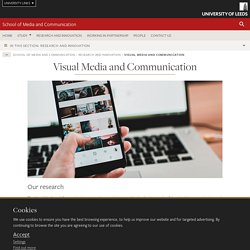 This group is interested in research on a wide range of media genres and media platforms, from soap operas to reality television, from British films to independent cinema, from stock photography to social media selfies. It also engages with forms of communication that are not traditionally considered as ‘media’ in their own right, such the built environment, design, performance, archives, and data. Communication Theories – Communication Studies. Actor-Network Theory (ANT) Actor-Network Theory suggests that human and non-human factors are equally influential in the success of technological innovation and scientific knowledge-creation. 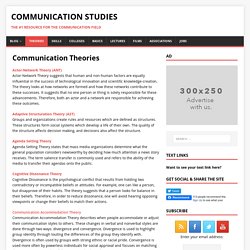 The theory looks at how networks are formed and how these networks contribute to these successes. It suggests that no one person or thing is solely responsible for these advancements. Therefore, both an actor and a network are responsible for achieving these outcomes. Adaptive Structuration Theory (AST) Groups and organizations create rules and resources which are defined as structures. These structures form social systems which develop a life of their own. Agenda Setting Theory Agenda Setting Theory states that mass media organizations determine what the general population considers newsworthy by deciding how much attention a news story receives.